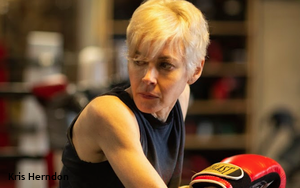 Boxing and fitness equipment marketer Everlast has persuaded the World Boxing Council to remove the word “female” from its championship belts as part of its “First Is Strong” campaign.

Launched earlier this month, “First Is Strong” honors women who embody strength, resilience and inspiration in and out of the boxing ring. It was timed to coincide with Women’s History Month and International Women’s Day.

As part of the campaign, Everlast launched a petition on Change.org to generate public support for both the WBC and World Boxing Organization to see all competitors as equal by removing the word “female” from their belts.

“Almost immediately after the campaign and the petition went live, the WBC reached out and agreed to make the change on the women’s championship belts,” Everlast senior marketing manager Josh Mevorach tells Marketing Daily. “Like we called for in the petition, call a champion a champion.”

Marketing Daily reached out to the WBO to determine whether it will remove the word “female” from its championship belts, but had not heard back by deadline.

“First Is Strong” is the latest iteration of Everlast’s “Be First” campaign — a reference to the concept of dictating the pace of a fight by making your opponent follow your lead.

At the center of the Everlast campaign are three women with ties to the world of boxing: promoter Kathy Duva, who in June will become the third woman inducted into the International Boxing Hall of Fame; former WBO featherweight champion Heather Hardy, who was the first woman to fight on a national television broadcast; and journalist Kris Herndon, the victim of an attempted rapist who found solace in boxing as therapy after her ordeal.

“There’s a lot of flexibility in strength, and it takes strength to stay open after something tough comes your way in life,” Herndon says in this video. "it’s a stronger choice to just get back up and keep coming.”

Everlast operates worldwide in more than 80 countries and “almost all of them are participating in the campaign in some form,” says Mevorach. “From sharing the petition to their networks, running digital advertisements and awareness campaigns on their social feeds, all our licensees are an integral part in sharing our messaging around the world.”

The company’s media strategy is predominantly digital and social. “We have over 2.5 million followers globally through our social networks. We leveraged our elite athletes on our Team Everlast roster who also helped share the content,” Mevorach adds.