Where To Find Bud Light: A Pub Service Announcement 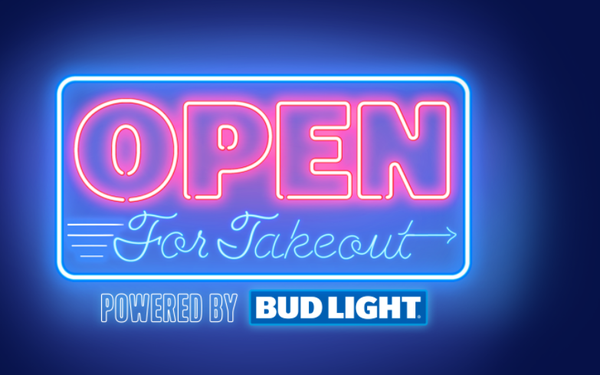 Prior to COVID-19, if you asked anybody in the United States over 21 if they knew anyplace around that sold Bud Light, they’d probably have stared at you as if you were crazy. As the nation’s best-selling beer, it didn’t exactly show up as an item on many scavenger hunt lists.

Today, it’s still not a hard question to answer -- but it’s a little trickier because the pandemic has closed some restaurants, bars and stores that usually have lots of it, while others are still offering it as a takeout option.

Anheuser-Busch InBev has now launched #OpenForTakeout, inviting companies to list their venue on a website directory so drinkers can reference it to find a place nearby. (Unsaid, but certainly not hard to figure out: Anyplace on the list probably has many other brands in stock, too.)

“Now, more than ever, we need to serve those who serve us,” begins a Budweiser print ad on social media in a tone that seems to convey at least a tone of public service solemnity.

The message continues: “It’s time to support every employee across America whose job depends on the success and survival of bars and restaurants.

“So every bar and restaurant across the country can now join the list to tell their local customers and the world that together, we are open for takeout.”

On social media, Bud Light has been having a little fun in these days of self-imposed social distancing.  One recent tweet reasoned, “Going out to the bars for a Bud Light: Not OK. Having a Bud Light at home with no pants on: Perfectly OK.”

Some bigger stores that specialize in selling beer and wine don’t need much more publicity. “We’re plenty busy without their help,” said the literally breathless manager of B&B Beverages in Doylestown, Pennsylvania,  who preferred to stay anonymous. “Who really needs the help are the bars and restaurants that are struggling.”

At B&B’s website and phone message system, customers are instructed about how to order from the parking lot.

Bud Light says it will divert some of its media spend toward driving awareness of what it calls a “consumer resource.” The brand would normally be advertising in sports events including Major League Baseball, which today was originally scheduled to begin its 2020 season.

Instead, Anheuser-Busch announced earlier it would donate $5 million to the American Red Cross, and that it would work with its sports partners to identify arenas and venues that can be used as temporary blood drive centers. It is donating media air time to the Red Cross for commercials.

The beer company  also created a 60-second video that extols the American spirit in time of crisis.