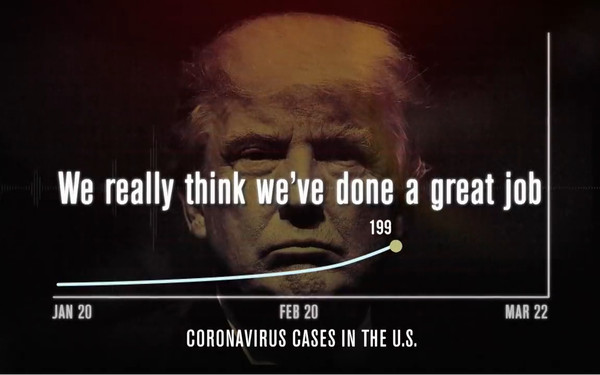 Now the President wants to pick a fight over a SuperPac political ad — all this as the country endures a massive cultural, health and economic disruption.

His campaign issued a cease-and-desist letter to TV stations running an ad from Priorities USA Action, a PAC that has supported Democratic presidential candidates. In addition to showing a chart of coronavirus cases rise, with Trump's comments playing down the virus, it also references Trump saying the word “hoax.”

The Trump campaign says association to the word is in the context of "Democrat's politicization of the coronavirus outbreak.” Trump has said as “this is their new hoax,” in reference to Democrats.

Here are the facts: At press time, over 2,800 people in the U.S. have died from COVID-19, among more than 150,000 confirmed cases. (Analyst say estimates are that cases could be 10 times that number.)

Trouble is Trump doesn’t have a healthy history of relaying facts.

While some of these mistruths, slips and outright lies have been corrected after the fact from his administration, virtually zero have come from the man himself. (In relation to the “Access Hollywood” tape in 2016, Trump did apologize in a video statement.)

Why this fight right now?

This year had been poised to be the biggest year ever for political advertising, due to the presidential election. So, will Trump e suing those outlets where his campaign might be running its own ads later this year?

Priorities USA Action has scheduled four creatives to run between March 24 and April 6, in the four major 2020 swing states of Florida, Michigan, Pennsylvania and Wisconsin.

The initial buy is for $6 million for TV and digital ad spend, with an estimated spend of $150 million overall for the entire presidential election cycle this year, according Advertising Analytics.

Will Trump's campaign punish those TV stations that have aired the Priorities USA political messaging by shifting future campaign messages away from those outlets to competitor TV stations, local cable TV operators, or local digital platforms?

That could make for an even more complicated TV election season.