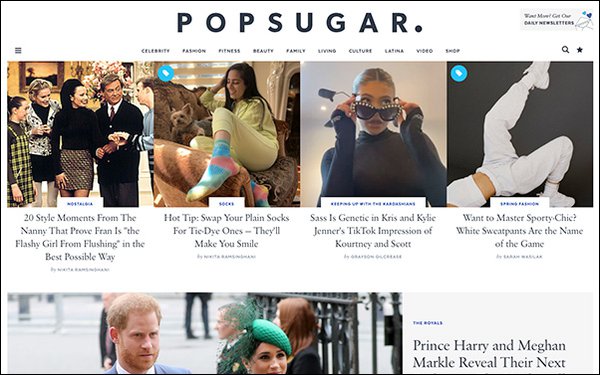 In a response to the economic fallout due to the COVID-19 virus, GroupNine’s PopSugar has launched a program to donate 50 million ad impressions across its owned-and-operated inventory to women-led small businesses.

The team at PopSugar began work on the initiative just over a week ago, after hearing about business owners who have a surplus of spring and summer inventory, due to canceled orders from big box retailers.

PopSugar is reaching out directly to female founders and thought leaders that it has worked with in the past, whether through editorial, PR, experiential or marketing initiatives.

Media placements include a rotation of standard banner ads sized across the PopSugar network, in addition to banner placements in PopSugar newsletters. Other opportunities include inclusion in relevant editorial and custom posts.

PopSugar is estimating as many as 5 million ad impressions per brand involved, but notes that number depends on how many brands participate.

Participants will also have access to creative services. Eventually, PopSugar plans to offer content and social support, as well.

“As a female founder, we want to support the other incredible, women-led companies during these unprecedented times,” stated Lisa Sugar, PopSugar founder-president.

“We are committed to helping women live their best lives and follow their dreams, so we want to help however we can. Our hope is that this new project brings awareness to smaller businesses that might not be in a position to proactively advertise their services.”