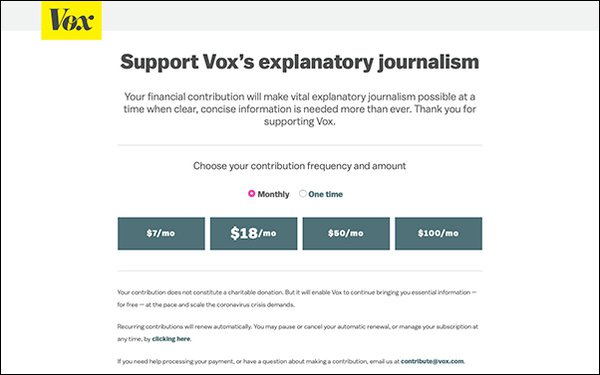 Vox has launched an audience contribution program so readers can help fund Vox's journalism. But it will continue to provide free content, without a paywall.

A spokesperson told Publishers Daily the reader contribution initiative, which had been considered at Vox for a while, was launched this week in response to the pandemic. Advertisers are pulling back, given the uncertainty in the market.

According to a post from staff on the Vox.com site, “Vox Media has a very diversified business, but without a subscription product or a paywall at Vox, advertising is still a major revenue source for our network.”

It continues: “While the economic crisis continues, advertising dollars will shrink as the public need for our service grows. That’s why we are turning to you, our loyal audience, for support.”

Readers are given the option to contribute $7, $18, $50 or $100, either as a monthly or a one-time payment. Audience contributions will support all of Vox’s journalism cross-platform.

Like a number of other publishers, Vox experienced what it calls “record audience demand” last month.

Vox had the most traffic in its history in March — on its own platform and Apple News — as well as the most YouTube views in Vox’s history. Overall, Vox says its COVID-19 coverage has reached more than 95 million pageviews and 44 million YouTube views.

Vox says it published one of the first stories on “flattening the curve,” which has been viewed more than 9.4 million times. A video inspired by that article has more than 6 million views on YouTube.

“Our dedicated team of journalists has boundless ambitions — and feels a great sense of responsibility — to bring you more of our distinctive coverage, in new and different ways, and to continue to do that for free,” Lauren Williams, senior vice president-EIC of Vox Media properties Vox and Recode, wrote in an editor’s letter published today.

Vox’s year-to-date podcast downloads are also up, nearly twice what they were in 2019.

Audiences are turning to shows like “The Ezra Klein Show,” “Today, Explained” and "The Weeds."