Hello's First TV Campaign: It's Strange But OK To Like Toothpaste 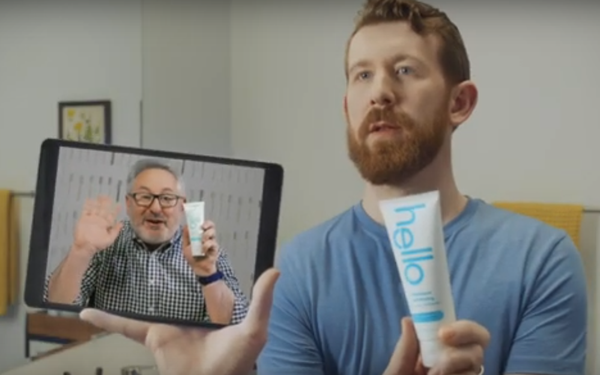 The first-ever television campaign for the Hello line of natural oral care products makes the smile-inducing claim that it’s okay for adults and kids to actually like their toothpaste.

“This category was long overdue for a more human approach,” Humanaut founder and chief creative director David Littlejohn tells Marketing Daily. “These spots bring to life that weird moment of discovery and the idea that people—even kids—look forward to brushing.”

In the 30-second TV spot, the voiceover talks about “delicious ingredients like farm-grown mint” while adults and children are seen “discovering the strange feeling of actually liking their toothpaste. Kids are even rushing to brush.”

One 15-second spot, titled “Strangely Skypeable” shows a husband in a bathroom Skyping with Hello founder Craig Dubitsky, who exclaims “I’m Craig. I make your toothpaste!”

Asked about the research that helped to inform the “Strangely Likeable” concept, Littlejohn says it derives mainly from consumer feedback on venues like social media.

“What we’re really basing the campaign on is how much more engagement they’re getting as a toothpaste brand compared to other toothpaste companies,” says Littlejohn.  “People literally take selfies with their toothpaste and post them to the thousands of five-star reviews Hello gets. It’s more based on unique truths in the category and about the product and putting those out as differentiators.”

TV buys for the campaign include premiere units in “Keeping Up With the Kardashians” on E! and “90 Day Fiance” (TLC) along with slots on Nick Jr., OWN, WeTV, LMN (Lifetime Movie Network), Lifetime, Bravo and Oxygen.

According to Nielsen, dollar sales of toothpaste rose 7.7% in the 52-week period ended March 28, while sales of “natural” toothpaste climbed by 16.7%.