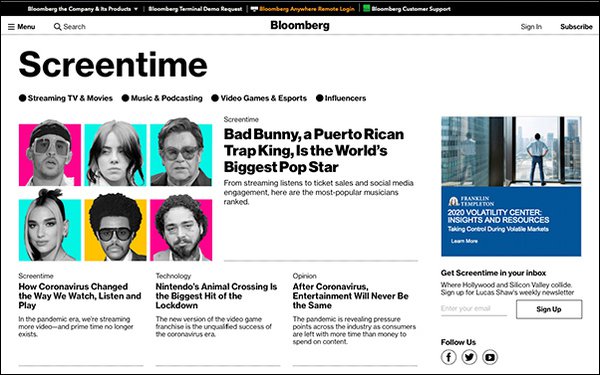 Bloomberg is launching a new digital vertical dedicated to the business and future of entertainment, called Screentime.

The hub will explore “how the rise of streaming technology and peer-to-peer social networks in the U.S., Asia and Europe are disrupting the business of entertainment around the world,” according to the company.

Screentime will focus on four main topics: television and movies, music and podcasting, esports and video games and influencers.

It will cover, for example, the streaming TV and video wars, the podcasting boom and streaming audio platforms, the rise of online gaming and social-media influencers becoming entertainers and marketers.

“In the next week, we will bring your stories about how the lockdown era is changing entertainment as we know it, as well as articles about gaming in India and Roblox, a sort of online playpen for America’s kids. And, of course, we will cover NBCUniversal’s big move into streaming with the initial rollout of its Peacock service tomorrow,” writes Bloomberg senior executive editor John Fraher in a note to readers.

Screentime will also publish a weekly newsletter, authored by media and entertainment reporter Lucas Shaw, who will build the product off of his current "Hollywood Torrent" newsletter.

Puerto Rican rapper Bad Bunny came out on top this month. He was the most popular artist on Spotify and YouTube last month.

Bloomberg has created other dedicated digital verticals recently, such as Prognosis, Checkout, Future Finance and Wealth.

He will interview top executives on how they are managing their companies from afar during the COVID-19 pandemic, in weekly, half-hour episodes. The first episode debuts today, featuring Marriott CEO Arne Sorenson.

Like a number of other publishers, Bloomberg says its experiencing record readership and engagement during the COVID-19 crisis, including across its premium subscription portal Bloomberg Terminal, Axios reports.