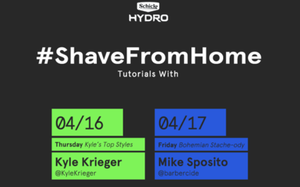 All those itchy, scratchy #quarantinebeards are driving men nuts. And the ones most able to help -- the barbers of America -- have been sidelined by business closures. So Schick Hydro is coming to the rescue of both with #ShaveFromHome, a cause-related campaign aiming to make money for laid-off grooming experts.

“Men miss their barbers,” says Allison Feldman, group marketing director at Edgewell Personal Care. So the company is paying five barber/influencers, who’ll create virtual grooming tutorials. “And users can leave a virtual tip, which goes to the National Association of Barbers, which has started a fund to help those who are struggling.”

Feldman tells Marketing Daily that the Chilton, Connecticut-based company was on the verge of introducing a planned campaign, which it’s pushed back in favor of the new effort.

The company is also putting paid digital support behind the effort, as well as promoting it on its social networks. Edelman created the campaign.

“We know users of our brand are struggling to look their best at home, and think they’ll appreciate the chance to get advice -- and help out the country’s barbers,” she says.

In the months ahead, will a recession add to the already strong trend toward beards, as in “Hey, I’m not working anyway?” Or will more men move toward a clean-shaven style, which is both less germy and more corporate?

Feldman says it’s too soon to tell if the COVID-19 crisis will spark either change in men’s grooming, beyond the current work-from-home scruffiness.

“But we do know that no matter what, guys are still going to want to have a style and to feel somewhat normal.”

Earlier this year, it dropped its $1.37 billion bid for Harry’s Inc., a D2C brand, after the Federal Trade Commission said the deal would eliminate too much competition in the men’s shaving category.