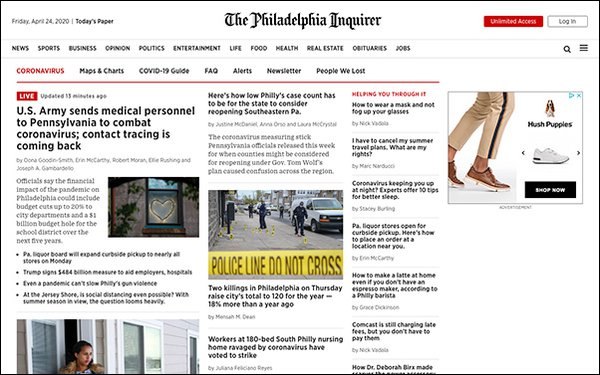 Across sales, 55 guild members were offered the deal, while full-time newsroom employees 65 and over were, too.

The newspaper needs approximately 20 people to voluntarily apply in the sales department to avoid layoffs.

The offer of newsroom buyouts occurred after employees expressed interest; no layoffs are planned for the division, the Poynter Institute reported.

The news was delivered via a memo from publisher-CEO Lisa Hughes. Hughes was named CEO and publisher in January and is the paper’s first female to hold the post.

While the COVID-19 pandemic has increased financial issues at the Inquirer, Hughes stated the paper lost 25% of its sales revenue — $13.5 million — between 2017 and 2019. During that period, the newspaper didn’t experience a significant drop in sales staffing.

“So this move is part of a reorganization that was planned and aligns with our strategy for an integrated, multiplatform sales organization. Unfortunately, the effects of the COVID-19 pandemic will mean an additional estimated revenue loss of 20% this year and have accelerated this reorganization and necessitated more severe cuts than originally anticipated,” Hughes wrote.

The Inquirer experienced a round of layoffs in 2015, losing 12 of around 200 employees as part of a larger restructuring plan.

The Poynter Institute notes the Inquirer received $250,000 last month as part of the nonprofit Lenfest Institute’s push to support newsrooms covering the coronavirus by contributing $2.5 million to Philadelphia-based outlets. The Inquirer is owned by the Lenfest Institute.