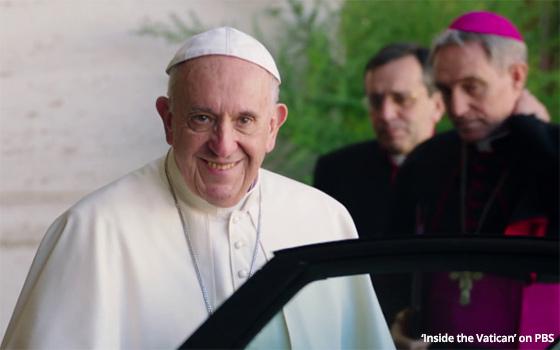 A new two-hour documentary about the Vatican is a classic example of TV’s great ability to take you places you otherwise cannot go yourself.

The title says it all: “Inside the Vatican” -- and that is exactly where you will go if you carve out two very worthwhile hours for this TV tour of the capital of Catholicism.

This show was filmed in 2018 over what appears to be most or nearly all of the entire year -- the fifth in the papacy of Pope Francis (who became pope in March 2013).

The documentary is in the grand tradition of other such voyeuristic docs that PBS seems to have a knack for exclusively. Over the past 10 or more years, these insider-tours have ranged from the palaces and the day-to-day life of Queen Elizabeth to the White House and Air Force One.

They are uniformly great shows, and this new one on the Vatican -- produced by Oxford Film and Television Production for the BBC -- is no exception.

The film fascinates from beginning to end as it traverses the entirety of the 151 acres that comprise this city-state that was officially established by a treaty between the government of Italy and the Catholic Church in 1929.

In “Inside the Vatican,” you will meet office workers, diplomats, police officers, maintenance staffers and a host of others who make the Vatican run every day. There are plenty of priests, of course, and the Pope himself.

The documentary positions Francis as a decidedly liberal, reform-minded pontiff. But even he admits that “making reforms [in the Catholic Church] is like cleaning the Sphinx of Egypt with a toothbrush.”

Having said that, in the documentary, the Pope is seen appointing 14 new cardinals, some of whom come from parts of the world that have not traditionally ranked high in the church hierarchy.

In the show, this is provided as evidence of the Pope’s activism where the power structure of the church is concerned.

“What Francis has done is taken away the rule book when it comes to appointing cardinals,” says one Vatican journalist in the documentary. “The Pope is thinking about appointing men who aren’t the powerbrokers, the power players in the clerical machinery. And it’s as if he is saying that this is where the center of the Church should be -- in these places that are often forgotten.”

While the Vatican is the centrifugal core of world Catholicism, and its staff are all Catholics themselves (or so the documentary makes it seem), the show makes the point that Vatican City is a uniquely international place.

On any given day, it is full of visitors from all over the globe -- including throngs of tourists and a wide array of officials representing other governments and worldwide religions.

As this documentary reveals over and over again, this international city and center of one of the world’s great religions is dressed to impress.

The best feature of this documentary is, of course, the pictures -- since, after all, television at its heart is a visual medium above all else. Here, the pictures tell the story.

And the images on view -- the statues, paintings, vast interior spaces clad in marble and granite, and all the frescoed ceilings in nearly every room --  are not to be missed.