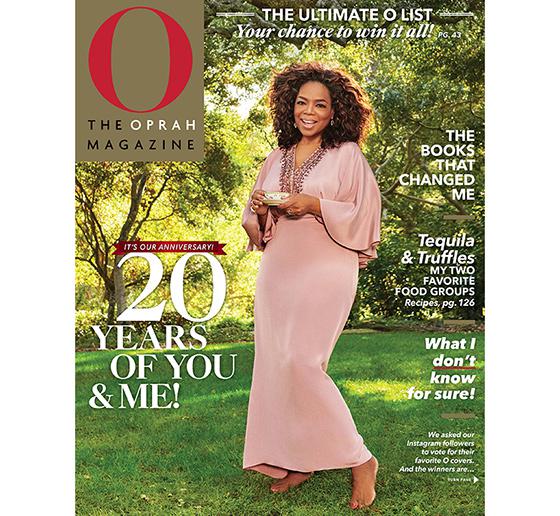 This year marks two decades since O, the Oprah Magazine hit newsstands. The team behind the title have had to adjust to launching the celebratory issue amid the COVID-19 pandemic.

With a canceled party planned for May, the team had to quickly pivot to an alternative option. That includes virtual parties with clients celebrating through trivia based on the brand and Rice Krispy treats delivered for the occasion.

The milestone has offered a moment of reflection for the people behind O to consider how the magazine has evolved and impacted the lives of both readers and those who publish it.

“What’s been so wonderful about the magazine’s evolution are the core things that are inviolable, that are in so many ways, a reflection of Oprah herself. We have this unbelievably strong heart and face of our magazine, which stands for things like connection and going deep within yourself.

"It's about always being inquisitive and curious about the world and kind. About being someone who knows that what you put out is what you’ll get back,” Lucy Kaylin, EIC of O, told Publishers Daily.

“All of that is central to who we are, but just like Oprah, we’ve evolved.”

Kaylin notes that as the years have gone by, O has turned its focus toward “the territory of timely wisdom vs. timelessness, which is where it all began,” particularly as it navigates a politically divided country and landmark movements like #MeToo.

The 20th anniversary issue features pieces like “The Oral History of O,” “Oprah’s What I (Don’t) Know for Sure” column and the “Books that Changed Oprah.” The magazine’s digital arm, which launched in fall of 2018, is offering  additional content, including a special episode of its “OG Chronicles,” featuring Oprah and Gayle King.

Arianna Davis, digital director, OprahMag.com, noted the pandemic has opened up a unique opportunity for the site to connect with its audience.

“With the pandemic, we’re figuring out how to pivot our content to be more inspirational as the world is panicking. How can we provide service and laughter?” Davis said.

Some of the ways Davis has steered the brand’s digital arm toward deeper connections include an Instagram series featuring her in conversation with different celebrities to see how they handle social distancing, including one where she spoke with Oprah about quarantining separately from longtime significant other, Stedman Graham.

“With the coronavirus, we’ve seen that we have the tools and opportunities to keep readers connected to the here and now,” said Davis. “We’re looking to tackling more ambitious projects, reported features and deep dives.”

The anniversary also offered an opportunity for the magazine to deepen its relationship with longtime sponsors, like Olay and Talbots.

For the issue, Olay sponsored a high impact cover that features four throwback O covers — two from 2013, one from 2010 and one from 2005 — and quotes from Oprah. An Olay ad appears adjacent to each cover, while an additional 500,000 subscriber copies include a personalized note from Oprah on the cover. O fans on Instagram selected each of the covers.

Hallmark sponsored the back cover, creating a custom greeting card targeted specifically to younger audiences to encourage them to send cards with a message focused on connection.

“Who knew what we were going to be facing right now,” said Jayne Jamison, senior vice president-publisher-CRO, in reaction to the Hallmark ad. “Online, there’s a huge digital program that’s all about things, like what if you and your mother aren’t together on Mother’s Day.” She added there’s an Oprah quote inside the card ad unit.

Brands that have been with O through the years, like Holland America, Vionic Shoes and Lane Bryant, each ran tribute ads in the issue.

Talbots, which has been working with O on an annual clothing line for five years, used the magazine’s anniversary to celebrate five years of partnership with a signature wardrobe staple, the cardigan. O’s creative director Adam Glassman designed five one-of-a-kind cardigans meant for different occasions.

Each of the cardigans was available for purchase at Talbots, with 30% of the proceeds directly benefiting nonprofit Dress for Success. To date, the O and Talbots collaboration has raised over $6 million dollars for the nonprofit.

As the magazine hits its two-decade anniversary, Jamison announced last week she will retire at the end of May. Jamison has been with Hearst for more than two decades and joined O in 2014, just ahead of its 15th anniversary. She worked closely on other titles, such as Redbook and Seventeen.

“When you’re on a brand, you want an engaged audience,” said Jamison. “This has been like a dream come true.”