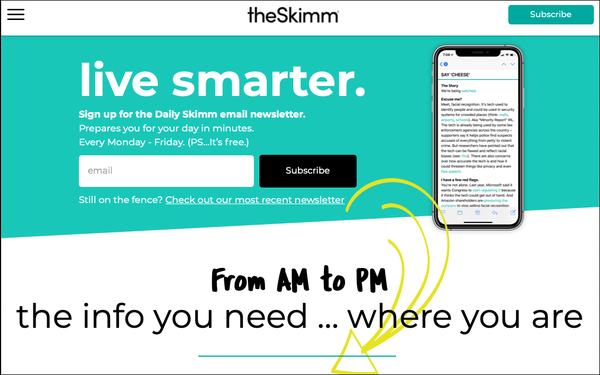 Digital media company theSkimm is letting go of about 20% of its 130 employees.

theSkimm's newsletters gained popularity for curating and breaking down news for a millennial females. The company has expanded since its founding in 2012 to include podcasts, video series and a paid news app.

According to The Wall Street Journal, which first reported the news, theSkimm does not plan to undergo additional rounds of layoffs during the COVID-19 pandemic.

Employees from different departments of the company were affected by the cuts. Brian Papa, director of iOS engineering, was  among those let go, according to his Twitter accounts.

Those that have been let go will get a minimum of one month’s severance and health insurance through July, the WSJ reports.

As of 2019, theSkimm had an audience of more than 7 million.

Separately, employees at The Los Angeles Times newsroom are getting a 20% pay cut and fewer hours, from May 10 to August 1. The move is part of an effort to cut payroll by more than $2 million.

The L.A. Times Guild, which represents newsroom employees, issued a statement saying the deal reached with the Times avoided more than 80 layoffs and other cuts to the newsroom.

“There will be no more newsroom layoffs this quarter,” according to the statement.

“We are thankful that management accepted our proposal to avert layoffs, but this is a painful cut,” it reads. “Like the vast majority of newsrooms across the country, The Times has lost significant revenue due to the coronavirus pandemic, despite historic demand for our journalism.”

The Guild called the pay reduction a “work-sharing” program, where workers can keep their health and retirement benefits and can collect “prorated unemployment benefits to offset lost wages” until their hours are restored.

“Work-sharing is rarely used in journalism despite its obvious utility for an industry known for layoffs. We strongly encourage other newsrooms to examine work-sharing as a possible alternative to cuts in states where the program is available," the statement reads.

Local news publishers often rely heavily on advertising from businesses in the area. With many cities on lockdown and businesses forced to keep their doors shuttered, advertising has scaled back considerably.

“Public health guidelines related to the coronavirus have led to both unforeseen reduced revenue and unplanned expenses for our company,” he wrote in an internal memo. “The decline in revenue from every area of our business is unprecedented.”

At the time, the newspaper company announced staff furloughs and pay reductions.

In his memo, Argentieri expressed hope “these will be temporary measures," as the company seeks "to stabilize our operating budget and begin planning for a return to business as usual — or a modified version of it, as humankind adapts to life with COVID-19.”