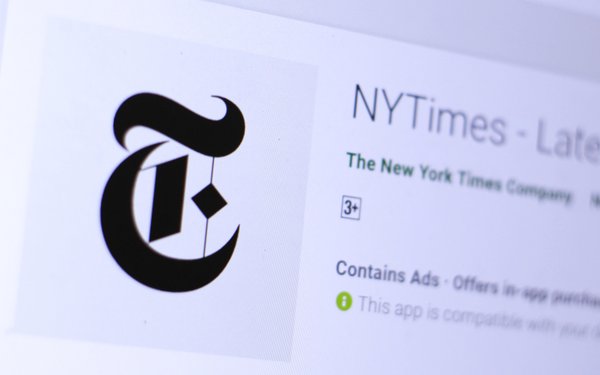 “This was despite the fact we are allowing audiences to access the majority of our coverage related to the coronavirus outside of our pay model,” stated Mark Thompson, president-CEO of The New York Times Company.

This brings the Times’ total number of digital subscribers to over 5 million, with 6 million total subscriptions across digital and print.

Of the 587,000 new digital subscriptions, 468,000 were to the Times’ core news product. Another 119,000 was to the company’s other digital products, including Cooking, Crossword and audio products.

“The Times’ business model, with its growing focus on digital subscription growth and diminishing reliance on advertising, is very well positioned to ride out this storm and thrive in a post-pandemic world,” stated Thompson.

The company suffered from declining advertising revenue, due to the effects of the COVID-19 virus, he noted.

Thompson said the company believes advertising in the second quarter “will fall between 50% and 55% compared to a year ago with limited visibility beyond that.”

However, subscription revenue “and our strong balance sheet" give the company confidence that it can "remain financially sound through the pandemic, but also that we can safely invest in our digital growth strategy and continue to hire new talent to help execute it,” Thompson added.

Subscription revenues increased 5.4% in the first quarter of 2020 compared to the same quarter in 2019.

The Times said internal data shows a record 240 million global uniques in March, which represents over half of all American adults, according to the company.

The Times is also introducing a new advertising campaign: “The Truth is Essential.”

It highlights the newspaper's investigative reporting on the spread of COVID-19, conspiracy theories coming from Beijing and the United States and analysis on the measures needed to defend against the virus.

The campaign spans across television, digital and social media.

It was developed in collaboration with creative agency Droga5.