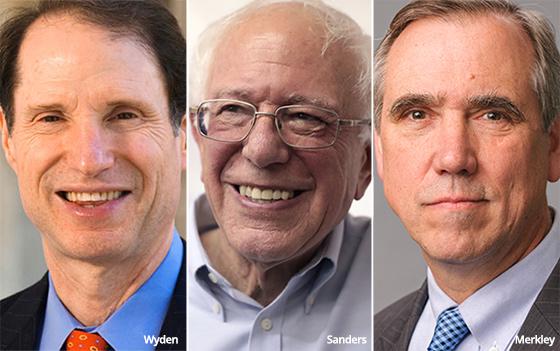 Internet and phone providers would be prohibited from disconnecting consumers until at least six months after the end of the COVID-19 pandemic, under legislation proposed Tuesday by Sens. Jeff Merkley (D–Oregon), Bernie Sanders (I–Vermont) and Ron Wyden (D–Oregon).

The Continuing Online Networking, Negating Economic Conditions on Technology (CONNECT) At Home Act would also require providers to reinstate service to anyone who disconnected after March 13 of this year -- the date when President Donald Trump declared a national emergency over the pandemic. Companies that violate the proposed law could face fines of up to $100 per day.

More than 700 internet service providers have signed on to Federal Communications Commission Chairman Ajit Pai's “Keep Americans Connected” initiative, which launched in March. Those providers have promised to refrain from terminating service to residences or small businesses due to customers' inability to pay bills. The companies also agreed to waive late fees.

Despite the public promises, some wireless providers -- including Verizon and T-Mobile's Sprint -- have disconnected customers who were unable to pay their bills, according to NBC.

Verizon and T-Mobile told NBC that customers faced with financial difficulties must contact the companies proactively.

Advocacy group Free Press cheered news of the bill, stating that the FCC's efforts haven't been enough to prevent terminations. “ While Free Press Action appreciates the many internet service providers that have signed Chairman Ajit Pai’s pledge not to terminate service for customers who can’t pay their bills, the fact remains that this pledge is voluntary, unenforceable and far from universally adopted,” policy manager Dana Floberg stated.