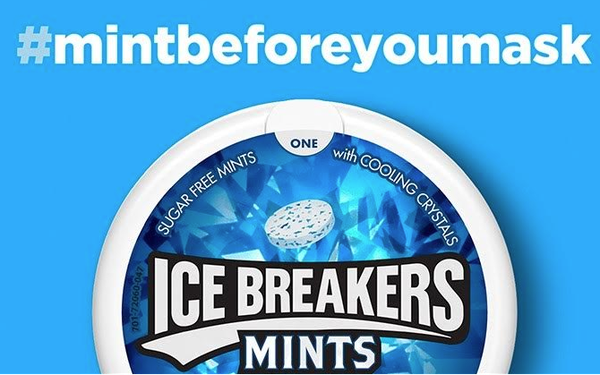 Turns out breath mints aren’t considered essentials during the ongoing pandemic, since sales are actually down. But C-Sweet, the in-house agency at The Hershey Co., hopes to change that fact.

A new campaign from Hershey’s Ice Breakers suggests taking one of its mints before donning a mask -- to protect themselves from the unintended consequences of their own bad breath.

In this 15-second spot, a woman puts on a mask while the voiceover says “Thank you for wearing a mask. For grandparents, neighbors and cashiers” -- and then adds “How about a mint before you mask? Because mask breath, it’s real.”

The “Mint Before You Mask” concept originated when a Hershey employee whose fiancée works at a hospital reached out to Ryan Riess, C-Sweet's senior director of social strategy and content.

“Have you ever heard of mask breath? [The employee] went on to explain what it is -- and now that everyone is wearing masks, wondered if that was something we might want to talk about,” Riess tells Marketing Daily. “There’s those moments in your career where you feel like, oh my gosh, this is really a great nugget of an insight. It hit me straight on that this is an amazing opportunity,” he adds.

Sales of mints have been down because with the quarantine and social distancing, “the main function of the mint as a kind of breath confidence was no longer relevant,” Riess says.

The commercial will run on digital channels and television, with media handled by C-Sweet’s media team in conjunction with UM and Accordant Media.

In other candy-related news, Mars Wrigley’s M&M’s is inviting fans to color a picture found in the digital coloring book at helpuscolor.mms.com.

Every picture colored will correspond to a dedicated frame within an upcoming M&M’s commercial, enabling winners to see their color schemes get national exposure. Submissions are being accepted through May 17, with the final 15-second ad to air in June on national TV and online video.

“The role M&M’s plays in consumers lives is all around offering spontaneous fun,” says Allison Miazga-Bedrick, senior brand director at M&M’s. “We know M&M’s fans love to express themselves, and there is no better way to do this than allow them to possibly be a part of our next TV ad.”