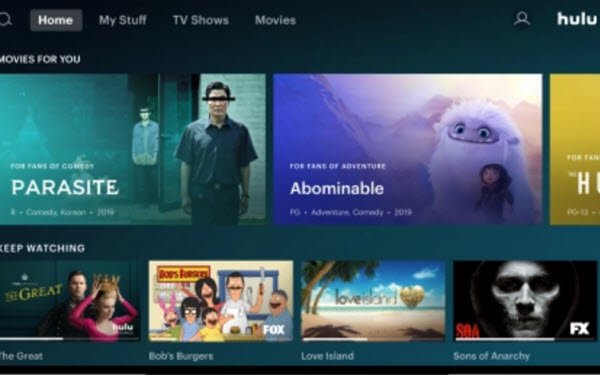 Hulu, now under Disney’s control, has gotten an update designed to make navigation and content discovery easier, and provide a more consistent experience with its bundle mates, Disney+ and ESPN+.

“We listened to feedback from our viewers and heard they loved how easy it was to continue watching the shows and movies they love, but not as easy to discover new content,” Jim Denney, VP, product management and Jason Wong, director, product management, wrote in a blog post.

Hulu reported 32.1 million total subscribers, including 3.3 million customers of its live TV package, as of March 31— up 27% from a year ago.

Hulu’s user interface changes are active now on Roku and Apple TV devices and will roll out over the next few months, they report.

Viewers can now navigate through collections vertically and explore within a collection by moving horizontally. This matches the navigation pattern across Disney+ and ESPN+, making it easier for viewers who subscribe to the bundle to switch between services.

Categories of content such as like TV, movies and sports are being moved to the master navigation, requiring fewer clicks to find content within Hulu’s library.

Tile size is now being used to further highlight content titles, including new offerings, that are likely to be of interest to individual users.

On the backend, Hulu said that it is improving recommendations by having its human team of content surfacers work more closely with its algorithm-driven recommendation system.

“With this change, a viewer who may be a fan of medical dramas will see those titles first in a curated drama collection,” while “a fan of romantic dramas may see those prioritized instead” in the same collection, said the company.