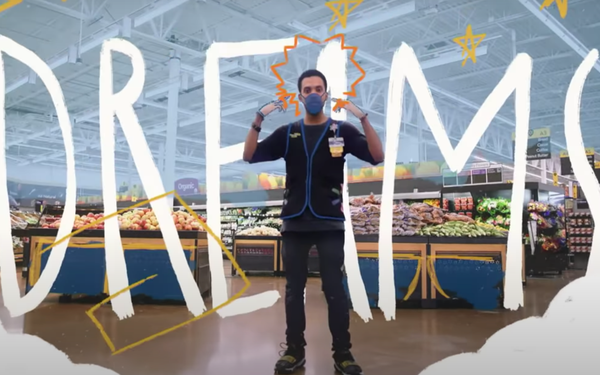 When Walmart associate Terrell “Trizz” Myles isn’t at work, he’s an aspiring Arizona rapper. And when he penned an upbeat poem about coming together to beat COVID-19, Walmart’s marketing team liked it so much they turned it into an ad.

Myles works at a Walmart in San Tan Valley, Arizona, and the company has featured his work before. The retailer has used many of its talented employees in ads on several occasions. Members of its SparkApella group recently recorded a pandemic-inspired version of “Lean On Me,” and Code S.P.R.K., its rap group, has also made videos.

“The video’s direction and production team gave instructions remotely through Zoom and the video was shot in just a couple of hours,” a spokesperson tells Marketing Daily. “All animation was completed in post-production.”

The spot is running on the Bentonville, Arkansas-based retailer's social and digital channels, and is meant to inspire a little spark of positivity, the spokesperson says. It’s also a way to “create additional opportunities for our amazing associates to share their passions and talents. Walmart is tech-empowered, but more importantly, it is people-led, and our associates are what differentiates us.”

The ad comes as the role of front-line workers like Myles seems more complex, labeled as either heroic or exploited.

Walmart, which just announced a 74% jump in its online sales, says it has hired an additional 250,000 workers since the beginning of the COVID-119 crisis to deal with the crush of demand.

Walmart recently announced a second round of cash bonuses for workers, but has long been criticized for underpaying its people. Other essential retailers, including Kroger and Amazon, have been called out for eliminating hazard pay.

And workers’ advocates have singled out the grocery-store industry for failing to protect front-line employees.

The United Food and Commercial Workers International Union, which represents about 1.3 million people, says COVID-19 has killed at least 68 grocery store workers, and that 10,000 have gotten sick.