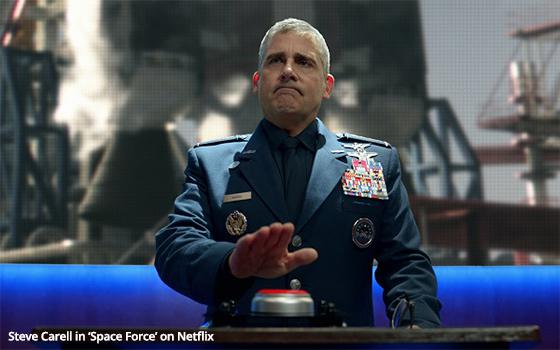 Netflix’s timely new comedy “Space Force” boasts an assemblage of talent that people used to refer to as “an all-star cast.”

In this case, they are comedy all-stars, starting with the series star and co-creator, Steve Carell. For the most part, the others turn up briefly in the series premiere, but we have every reason to expect them to recur.

The list includes Lisa Kudrow, Diedrich Bader, Patrick Warburton, Jane Lynch and even Fred Willard, in what appears to be the last work he ever did. He died on May 15.

The cast also includes John Malkovich and Noah Emmerich, who was so memorable as the FBI agent neighbor of the Soviet spies in “The Americans.”

Greg Daniels, co-creator of the American version of “The Office” and a producer and showrunner on other top TV comedies, is the co-creator of “Space Force.” The show starts this Friday (May 29) on Netflix.

With Carell and his “Office” producer in the saddle on “Space Force,” you have every reason to wonder if this new comedy is “The Office” transferred to NASA.

Although there is some validity in that presumption, it is not entirely true either. In “Space Force,” Carell plays a newly minted four-star general who is put in charge of the newest branch of the United States Armed Forces known as the Space Force.

The USSF will have jurisdiction and responsibility for all space-based defense methods and technologies beginning with its first goal, articulated by the Carell character, Gen. Naird: “Boots on the moon.”

Not surprisingly, and somewhat like the Michael Scott character that made Carell famous in “The Office,” Gen. Naird is a well-meaning bumbler who is in over his head.

And like “The Office” -- and at last count, approximately half a million other TV comedies -- this show’s chief bumbler is surrounded by other eccentric characters, some bumbling and some not.

Pointing out that “Space Force” is little different than many other comedies that have come before it is not necessarily meant to condemn it. Whether or not his Gen. Naird character is Michael Scott in epaulets, Carell is still one of the funniest humans alive.

He elevates “Space Force” and makes it worth watching all on his own. His all-star cast of supporting actors is like icing on a many-layered cake.

The timing for the debut of this wholly fictional “Space Force” series just months after President Trump announced the formation of a real-life U.S. Space Force in December, and days after he unveiled an official USSF banner earlier this month, would appear to be coincidental.

Whether or not the co-creators of this TV show were aware that President Trump was concocting a Space Force of his own while they were making their show, they have peppered the show with oblique references to the president anyway, mainly concerning his addiction to Twitter.

In the final analysis, “Space Force” is a new TV comedy that is far better than most of the TV comedies that have come along recently. And if that sounds like faint praise, then so be it.