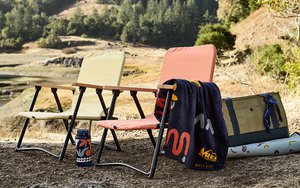 Cooped-up campers have one more reason to pack up their tents and head outdoors: REI Co-op is partnering with West Elm on a trendy new outdoors collection.

REI, a co-op headquartered near Seattle, is a retailer best known for authentic and rugged gear, and the enthusiastic support of its 18 million-plus members. But it’s not above a little glamour. The REI x West Elm lifestyle products include items that are pretty -- bright, reusable tableware and abstract-patterned outdoor pillows, for example -- as well as practical, like a folding campfire table.

West Elm, owned by William-Sonoma, worked with REI to design the 35-product line, most priced under $60 and aimed to help people “feel at home, outdoors.”

REI Co-op says the collaboration marks the first time its gear will be sold at another retailer.

The two companies have also co-produced an episode of “Camp Monsters" the REI podcast designed to put a good healthy scare into those sitting around a campfire. But this version, in a nod to West Elm’s Brooklyn base, dives into the urban legend of the Brooklyn Bridge Monster, said to have washed up on the banks of West Elm’s Dumbo, Brooklyn headquarters in 2012.

Just how many people are going camping, however, is up for debate. While interest in camping has been climbing steadily for the past decade, according to the new 2020 North American Camping Report, COVID-19 has thrown everyone’s travel plans into limbo. Still, the report predicts a rise: “As more people search for safe, affordable vacation options closer to home, it’s anticipated that the interest in camping will continue to grow at an accelerated rate.”

Among the campers it surveyed, 41% say they are still planning on taking camping trips this year, while 31% have canceled and 13% have postponed.

Once it becomes safe to travel, though, the report predicts that leisure travelers may turn to camping instead. Nearly half of the leisure travelers who also camp say they intend to replace one of their called-off or postponed trips with a camping trip (47%). Travelers who don’t camp, on the other hand, say they will replace a trip they have canceled or postponed with either a road trip or a visit to a hotel/resort trip (34% each).