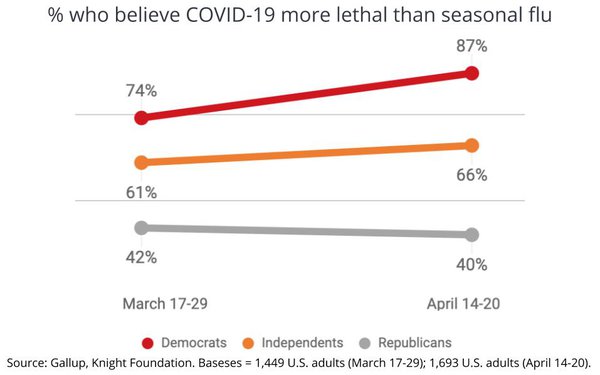 The political divide over the severity of the COVID-19 pandemic is growing wider according to a tracking studies of American voters by Gallup and the Knight Foundation.

The studies show that the vast majority of Americans registered as Democrats or Independent voters believe that COVID-19 is more lethal than the seasonal flue, while most Republican voters do not. The dichotomy between the two groups actually spread between late March and mid-April, even as the COVID-19 death toll began surpassing historic season flu tolls.

The report's analysts note that "beyond partisan affiliation and political ideology, news diet is a powerful predictor of how Americans view the lethality of the coronavirus."

While the report does not single out explicit news sources, a just-released academic research study by professors at Columbia University and the University of Chicago found a scientific correlation between Fox News Channel viewing and reductions in people staying at home during the pandemic (see related column).

"The likelihood that a hypothetical politically moderate independent with a conservative news diet would incorrectly answer this question increased four percentage points between mid-March to mid-April, compared with decreases of seven points for the same individual with a mixed news diet and 19 points with a liberal news diet," the Gallup and Knight Foundation report concluded.

The April study also found a significant split based on party affiliation over concerns that news media downplaying the threat of the pandemic puts the health of the public in jeopardy.