Cops, Race And Rioting: Just Another TV Weekend In America 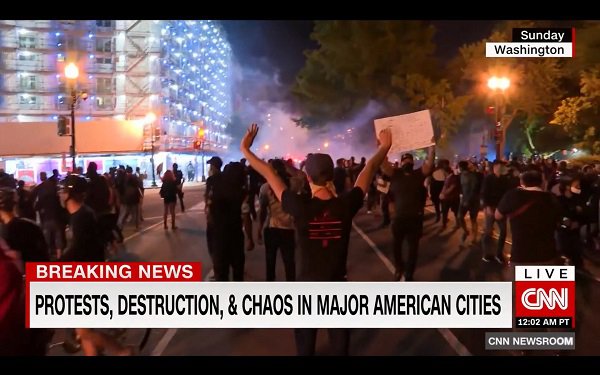 In the news business, as in life, the weekend most hoped for is the one with no work.

Whether it is a slow-news Saturday or a no-news Sunday, a weekend without breaking news means the weekend staffs can handle the Sunday and Monday editions on their own.

The call for all hands on a weekend is rare, even today in the era of so-called nonstop news. The fact is, news does stop or slow down, generally speaking, on typical weekends.

But this past weekend was anything but typical. All hands were on deck for a weekend of rage that played out on television.

The sights and sounds were tailor-made for TV technology. Multiple feeds from the scenes of unrest in cities across the country gave control-room directors plenty of action from which to choose.

The four predominant locations seen more or less continuously over the weekend were Minneapolis (now known as Ground Zero of the current crisis), Los Angeles, Washington, D.C. and New York.

On Fox News Channel, correspondent Steve Harrigan was seen on-camera in Minneapolis cringing from the sudden sound of gunfire somewhere nearby.

Elsewhere, Sunday on MSNBC, anchor Brian Williams gave a correspondent a moment or two to don a gas mask when it became apparent that police were firing tear gas containers in the correspondent's general direction.

And so it went. Protestors screamed angrily into the faces of heavily armed police and -- surprise, surprise -- the confrontations became physical.

Those of us who live in the cities where the news networks had chosen to originate the lion's share of their coverage were saddened to see the overturned cars, burning police SUVs and mayhem and destruction in neighborhoods not far away.

Many of us of a certain age could not help but think: When and where had we seen all of this before?

The answer: For most of our lives, from all over the place. We who have been watching the same kind of periodic urban looting and arson since we were small can only marvel, and feel dismayed, at how things stay the same.

Watching the onslaught of imagery from the riots over the weekend, it was reasonable to wonder, yet again, about the persistence of racial strife and unrest in America for all of our lives, and long before our lives too.

It is an understatement to say that the weekend's TV coverage of the anger, lawlessness and vandalism left us also wondering, with a sense of resignation and futility, when -- or if -- it will ever end.

Those of us old enough to remember the destructive riots of the 1960s can also remember how long it took our urban centers to rebuild and recover from them.

It took decades in many cases, and in some places, it is, or was, still underway -- right up until a new round of riots reared up to shock us all this past weekend, live and on television once again.