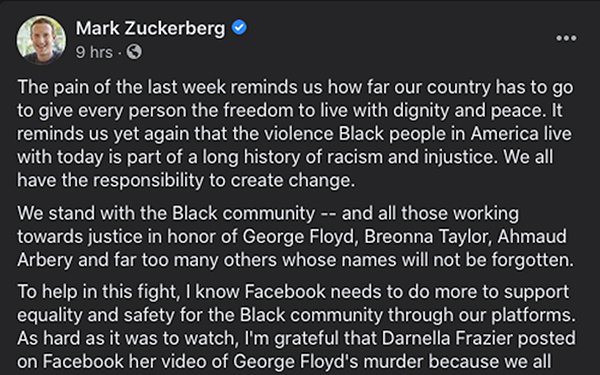 No matter how misleading or inflammatory, Mark Zuckerberg continues to support President Trump posting whatever he pleases.

“I’ve been struggling with how to respond to the President’s tweets and posts all day,” Facebook’s cofounder-CEO wrote late Friday. “Personally, I have a visceral negative reaction to this kind of divisive and inflammatory rhetoric.”

“But I’m responsible for reacting not just in my personal capacity, but as the leader of an institution committed to free expression,” Zuckerberg added. “I believe people should be able to see this for themselves, because ultimately, accountability for those in positions of power can only happen when their speech is scrutinized out in the open.”

Trump said later that he wasn’t promoting violence, but merely stating a “fact.”

Twitter added the label despite the fact that Trump signed an executive order designed to regulate speech on social platforms, last Thursday. The order was clearly a response to Twitter’s decision to begin applying its standard content policies to the President, earlier in the week.

In response to Twitter’s policy shift, Zuckerberg said social networks should not be policing politicians.

“I don’t think Facebook or Internet platforms in general should be arbiters of truth,” Facebook’s cofounder-CEO said on CNBC’s “Squawk Box,” last week. “Political speech is one of the most sensitive parts in a democracy, and people should be able to see what politicians say.”

Jason Toff, director of product management at Facebook, tweeted on Monday morning that he is “not proud of how we’re showing up. The majority of coworkers I’ve spoken to feel the same way. We are making our voice heard.”

Unlike Facebook’s position, Gillis added he respected Twitter for taking on Trump.

Adding another layer of intrigue, Zuckerberg spoke directly with Trump on Friday afternoon, according to Axios. Beyond being “productive,” the contents of the conversation have yet to be revealed.
facebook, social networks
Next story loading