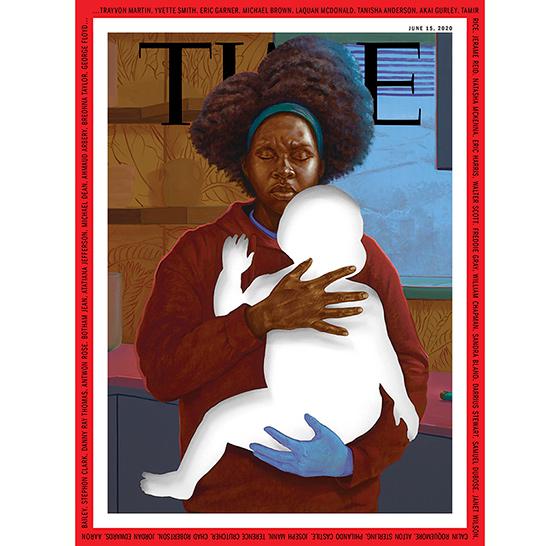 Time has dedicated its latest issue to exploring the protests against police brutality across the country, following the killing of George Floyd, in a special report called “A Nation Torn.”

The issue’s cover is an image of an African American mother holding her child, who has been cut out of the canvas to signify loss. The image, from artist Titus Kaphar, comes from a 60” x 60” oil painting titled "Analogous Colors." During the 8 minutes and 46 seconds Floyd was held to the ground by Minneapolis police officers, he called out for his deceased mother.

All four officers involved in the arrest of Floyd are now facing criminal charges.

Kaphar said of the Time cover: “This black mother understands the fire. Black mothers understand despair. I can change nothing in this world, but in paint, I can realize her. That brings me solace … not hope, but solace. She walks me through the flames of rage. My black mother rescues me yet again. I want to be sure that she is seen. I want to be certain that her story is told. And so this time, America must hear her voice.”

Kaphar also contributed a painting for a 2014 cover recognizing the protests in Ferguson, Missouri.

In addition to Kaphar’s painting, Time has used its iconic red border to honor those killed by systemic racism, though the number included is only a fraction. The border, a first for the magazine, features the names of 35 men and women whose deaths — many a result of police violence — helped propel the rise of the Black Lives Matter movement.

Time photographers also contributed photos documenting what they’ve seen across the more than 150 cities where people have gathered to protest.

American Family Insurance and P&G both have messaging related to the importance of equality within the issue.

Today, Time will host a Time 100 Talksvirtual event at 7 p.m., presented in partnership with P&G. The event focuses on the ways people are mobilizing for justice and equality across the country.

Speakers include Rev. William Barber II, president of Repairers of the Breach and co-chair of the Poor People's Campaign, Van Jones, CNN political commentator and CEO of The Reform Alliance, and Jess Morales Rocketto, civic engagement director of the National Domestic Workers Alliance and executive director of Care in Action, among others.