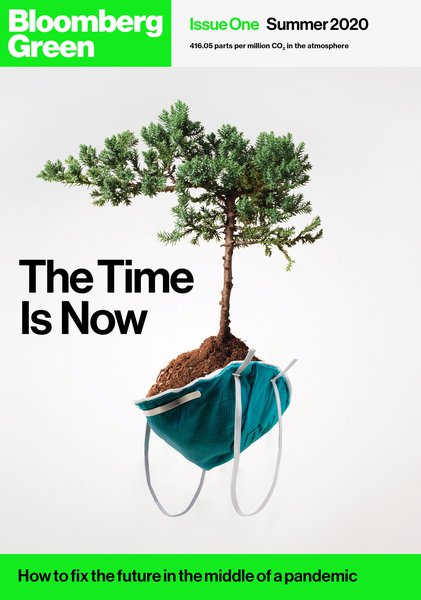 The magazine is part of the Bloomberg Green cross-platform editorial brand for climate-change reporting, which the company launched in January.

The brand focuses on the business, science and technology of climate change. Content runs on the Bloomberg Green website, a daily email newsletter, a podcast, videos, the Bloomberg Terminal, and now the magazine.

The Bloomberg Green magazine, which is printed on 100% recycled paper, is a collection of long-form features, opinion essays, data projects, science writing and visuals. It records the current amount of atmospheric CO2 printed on its spine.

Bloomberg Green is distributed to Bloomberg Media’s All Access (print and digital) subscribers. The magazine is also available on e-reader platforms, on Bloomberg.com and on the Bloomberg Terminal.

"We've created this new publication to become a chronicle of what's possible, and we printed it on glossy pages because magazines are one of the most powerful ways to shape public understanding of big ideas,” stated Aaron Rutkoff, editor of Bloomberg Green.

Advertisers for the debut Bloomberg Green issue include Amazon, HP Inc., Iberdrola, JLL, Morgan Stanley and Paper and Packaging Board.

The debut issue features a cover package exploring ways stimulus spending — enacted in response to the COVID-19 virus — can be used toward climate recovery.

An introductory essay by cofounder Michael Bloomberg explains why the pandemic will be a turning point for climate change.

Other stories focus on plastic waste, an Australian river system and Disney's controversial efforts to save a rainforest.