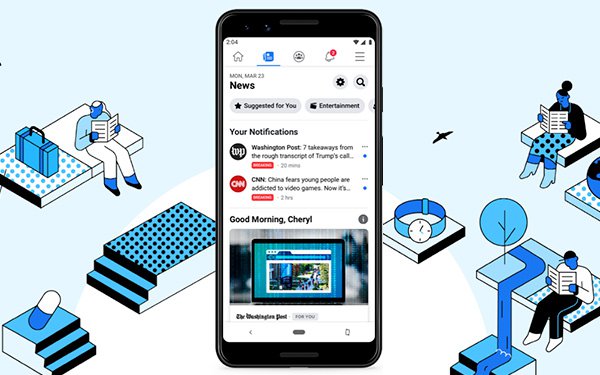 Following a prolonged testing phase, Facebook is finally offering its News service to all U.S. users. The tech giant has signed on about 200 news outlets, including The Wall Street Journal, BuzzFeed and USA Today.

In exchange for their content, Facebook was reportedly offering publishers up to $3 million in annual licensing fees.

Upon its original unveiling, the News service was widely seen as a potential threat to Apple’s News Plus, while it represented a significant realigning of Facebook’s content priorities.

Since then, the media landscape has been rocked by the pandemic and the civil-rights movement sparked by the killing of George Floyd.

News organizations were already wary of working with Facebook after it rolled out a big news push years ago, only to later backtrack and drop the initiative.

“We talked to news organizations about what they’d like to see included in a news tab, how their stories should be presented and what analytics to provide,” the pair said last year.

Even before the civil unrest brought about by Floyd’s death, U.S. consumers were uneasy about the power that social giants possessed as news gatekeepers. A clear majority of Americans (62%) said social giants like Facebook have too much control over the news people see on their platforms, according to a recent report from the Pew Research Center.

Further, a majority of Americans (55%) told Pew the role social-media companies play in delivering the news on their platforms results in a worse mix of news.

To address concerns of political bias and other content issues, Facebook formed a curation team to manage the Today’s Stories section of Facebook News. The team has editorial independence and is responsible for selecting stories based on publicly available guidelines, available at facebook.com/news

To be eligible for Facebook News, publishers have to be registered in its News Page Index and abide by Facebook’s Publisher Guidelines.

Just this week, however, a report from NYU’s Stern Center for Business and Human Rights blasted Facebook for relying on third-party vendors for content review, which it portrayed as a outsourcing of responsibility for the safety of billions of users.