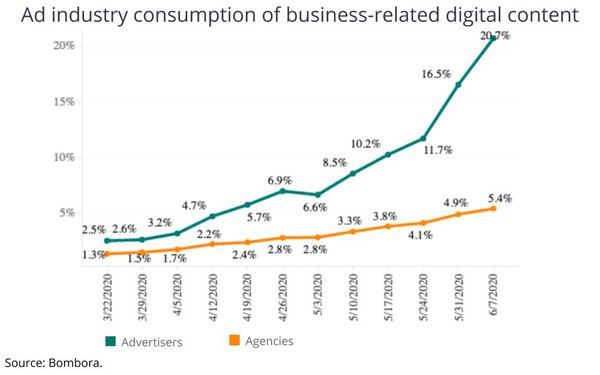 Ad industry interest in business-to-business content remains voracious -- especially among marketers vs. their ad agency counterparts -- according to the most recent tracking from Bombora.

The composite of content interest among advertisers and agencies shows both groups reaching their highest levels since the industry's content consumption crashed in early March following the shift to work-from-home restrictions.

In terms of subject matter, interest in "emerging technologies" has spiked among both brand marketers and agencies from mid-May on, according to Michael McLaren, CEO of the B2B Group at Merkle and an expert in analyzing Bombora’s data.

He describes it as "an inflection point for many industries seeking to pave a way forward, as talk turned from recovery and a return to how things were, to completely reimagining ‘normal’ in a post-COVID world, a new world order could emerge."

McLaren notes a shift to "remote selling" was "born of necessity as lockdowns, shelter-in-place orders, and quarantining have forced people to stay at home. However, we’ve seen a rebound in “international marketing” for brands and agencies as mandates begin to ease around the world. Customers will begin to crave the things they missed most, which may include your brand."

Other big interest spike topics in the past couple of weeks including a "huge surge" in "social media, especially LinkedIn, which McLaren says is likely related to leaked news that LinkedIn is considering restricting or censoring speech of elected officials glorifying or inciting violence, much as Twitter has done with the President's tweets.

"An economic downturn doesn’t necessarily mean that marketing and sales have to grind to a halt," McLaren concludes, noting that “'SEO/SEM retargeting' has never been more important and the stakes have never been higher, even if the downward trend for brands and agencies says otherwise. Brands that 'get it right' by recalibrating their approach and market themselves well during a crisis, can acquire new users, expand market share (or even market size) and come out stronger on the other side."