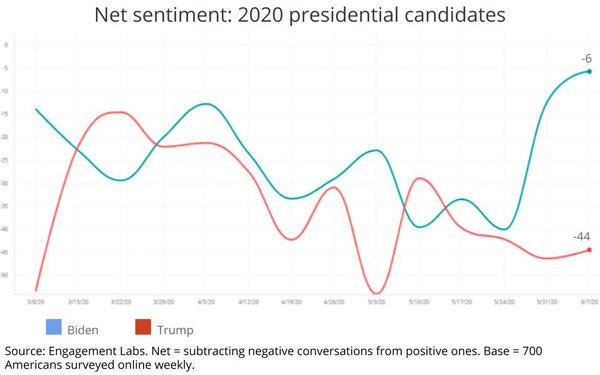 Net sentiment about Democratic challenger Joe Biden has improved dramatically in recent weeks, moving the presumptive nominee close to a net positive sentiment and increasing the margin with the incumbent to 38 points. While both candidates have remained relatively close -- and well under water -- since early March, the President's net sentiment remains mired at -44, according to a weekly tracking study by Engagement Labs.

"Conversations about politicians generally are more negative than positive, the opposite of the pattern we see for consumer brands," notes Engagement Labs CEO Ed Keller, adding, "Yet net sentiment for Biden among all Americans is just barely negative now, at -6, compared to -44 for Donald Trump.

"Differences of this kind around word-of-mouth sentiment have been shown to be predictive.  In the last days of the 2016 election a sharp trend in Donald Trump’s favor preceded his narrow victory over Hillary Clinton."

The margin was likely spread in recent weeks due to the President's handling of multiple crises, especially his militaristic response to civil protests that sprung up nationwide in reaction to the killing of George Floyd by Minneapolis police officers.

If the sentiment trending truly is a predictive indicator of election outcomes, Democrats should be in a good position for both House and Senate races this fall, as the margin of net negative sentiment between Democrats (-22) and Republicans (-53) currently is 31 points.

"The shift in word of mouth sentiment for the presidential candidates is mirrored in the way Americans are talking about the two parties in Congress," Keller notes, adding, "Between early May and early June, the net sentiment of 'Republicans in Congress' have worsened while improving for 'Democrats in Congress.'" 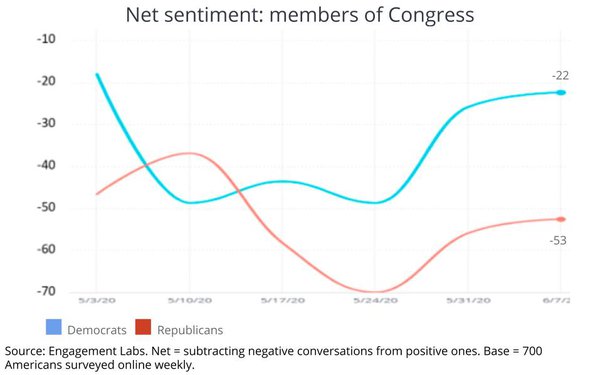