As connected TV matures, consumers’ CTV viewing habits increasingly resemble their linear TV ones, indicating that audiences are using CTV as more than an occasional supplement to linear TV.

That’s the main conclusion of a new analysis from FreeWheel, Comcast’s ad-server business.

The analysis is based on a sample of U.S. FreeWheel clients representing more than 95% of CTV-driven digital ad views in the platform’s broader research data set, taken from third-quarter 2019.

“The viewing patterns we’re seeing on CTV are mirroring what we’ve historically seen in linear TV, suggesting viewers are turning to new ways to watch their favorite shows,” says David Dworin, FreeWheel’s vice president, advisory services. “For advertisers, this represents an opportunity to tell their story to viewers they have not reached on other channels.”

Also, ad consumption — and by proxy, viewing — across all CTV device groups was found to rise gradually during the day and peak during prime time (8-10 pm), again replicating linear TV patterns. 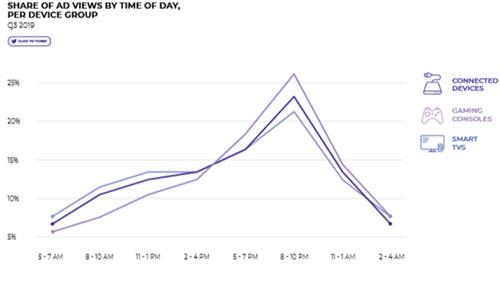 This indicates that campaigns limited to linear TV “would miss out on these CTV audiences, who are watching the same content during the same time period, but on a different platform,” concludes Dworin.

In addition, live-streamed content accounted for 33% of CTV ad-viewing share on attached devices (the most-used type of CTV viewing device), 29% on gaming consoles, and 40% on smart TVs. This is the same content distributed on linear, now moving toward time-shifted — again indicating that CTV and linear viewers are unlikely to overlap.

Among the other findings: