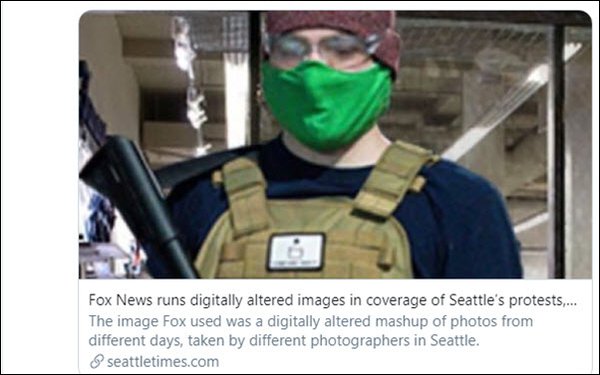 According to The Seattle Times, Fox removed the photos after the newspaper noticed the images on Friday and asked Fox about them.

The Times reported that on Friday, the Fox News site’s Seattle coverage showed two photos in which an image of a man standing with a military-style rifle had been inserted, initially with no mention of the photo manipulations; and a photo of a burning building and car that had actually been taken on May 30 during a protest in St. Paul, Minnesota. (The tweet above is from a Seattle Times editor, @Gina_Cole.)

By Saturday, Fox had added an editor’s note to the stories that carried the photos at issue: "A FoxNews.com home page photo collage which originally accompanied this story included multiple scenes from Seattle's 'Capitol Hill Autonomous Zone' and of wreckage following recent riots," the note read. "The collage did not clearly delineate between these images, and has since been replaced. In addition, a recent slideshow depicting scenes from Seattle mistakenly included a picture from St. Paul. Fox News regrets these errors."

The so-called Capitol Hill Autonomous Zone in Seattle has been largely peaceful, and city officials have denied right-wing conspiracy theorists’ claim that the zone has been taken over by a left-wing militia.

President Trump also claimed in a tweet that the city was being taken over by “anarchists.”

Fox News had not responded to DND's request for comment by posting time.