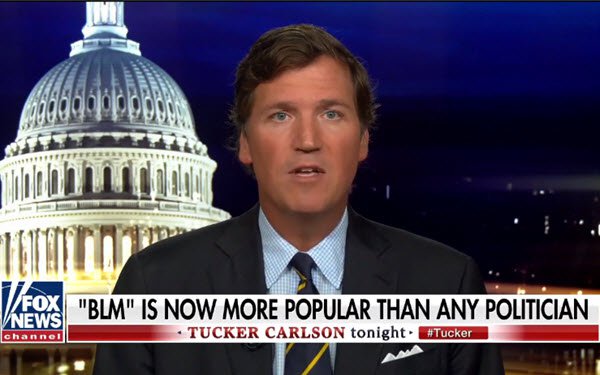 During a court proceeding in a slander suit yesterday, a Fox News attorney argued that “Tucker Carlson Tonight” is a “commentary” show rather than a news show.

Last December, Karen McDougal sued Fox News for slander in reaction to on-air remarks by Carlson back in 2018 about the circumstances surrounding suppression of McDougal’s story of her alleged affair with Donald Trump, in pre-Presidential days.

The background: After Donald Trump became the Republican Presidential candidate in 2016, The National Enquirer worked with Trump attorney Michael Cohen to suppress McDougal’s story of her alleged long affair with Trump.

The tabloid paid McDougal $150,000 for the “rights” to her story, which it then declined to publish — one of the admissions ultimately made to Southern District of New York prosecutors by David Pecker, CEO of Enquirer parent AMI, who, along with content chief Dylan Howard, secured a non-prosecution agreement in 2018.

Cohen was ultimately sentenced to three years in prison for campaign finance violations.

McDougal’s suit alleges that Carlson defamed her and accused her of a crime during a show in December 2018. The segment also discussed Stormy Daniels, who had been paid $130,000 by Cohen to suppress her own story of an alleged sexual encounter with Trump.

The suit focuses on these on-air comments by Carlson (as cited in the filing): “Remember the facts of the story, these are undisputed. Two women approached Donald Trump and threatened to ruin his career and humiliate his family if he doesn’t give them money. Now that sounds like a classic case of extortion. Yet for whatever reason, Trump caves to it, and he directs Michael Cohen to pay the ransom. Now, more than two years later, Trump is a felon for doing this. It doesn’t seem to make any sense. Oh, but you’re not a federal prosecutor on a political mission. If you were a federal prosecutor on a political mission, you would construe those extortion payments as campaign contributions.”

The suit charges that Carlson’s statements were “intentionally false and made with reckless disregard for the truth” — the standard for demonstrating actual malice in a defamation suit brought by a public figure.

It also notes that “according to the show’s website, Carlson advertises himself as a reporter of the news and refers to his show as the ‘sworn enemy of lying.’”

Fox News is asking U.S. District Court Judge Mary Kay Vyskocil to throw out the suit, arguing that Carlson’s statements aren’t defamatory because they can’t be interpreted as stating actual facts, and that actual malice can’t be proven.

In court yesterday, McDougal's attorney, Eric Bernstein, stressed the importance of Carlson’s use of the phrase “remember the facts," arguing that that signaled a change from commentary to news reporting, THR reports.

Murphy counter-argued that Carlson “repeatedly couched his statements as hypotheticals to promote conversation and that a reasonable viewer would know his show offers ‘provocative things that will help me think harder,’ as opposed to straight news,’” per THR.

She also argued that neither claiming a failure to investigate the truth of a statement or claiming that Carlson is aligned with Trump and therefore has a motive for lying meets the actual malice standard.

Vyskocil took the matter under consideration.