But as any competent marketer knows, just throwing money at an opportunity in no way ensures success.

And streaming sports is most certainly a significant opportunity. While most major sports are still in limbo,  OTT sports streaming's growth is set to resume with a vengeance once things begin to normalize.

To illustrate its scope: Late last year, ReThink projected that worldwide streaming sports media rights revenues would rise from $48.6 billion in 2019 to $84 billion by 2024, or nearly 75%. Soccer rights alone were projected to rise from $12.8 billion to $31.9 billion, mostly due to increased viewing of top European league matches in North America and Asia.

That’s not counting advertising or subscriber revenues, of course.

Audience growth has been robust. Even back in 2018, Activate estimated that there were as many viewers of esports as NBA viewers: 63 million each, noted eMarketer. Only the NFL and MLB had larger audiences, at 130 million and 83 million, respectively.

A single sports subscription service, DAZN, had more than 8 million subscribers as of the end of 2019, “a significant number from an advertising perspective,” noted Sports Video Group (SVG) Europe.

And the numbers and types of these services is exploding. “Sports rights holders, broadcasters like ESPN and even Amazon Video are delivering live sports events over-the-top in order to create new revenue streams,” pointed out Harmonica. “Even sports federations and leagues are joining the streaming business with their own channels and services. Some of the live sports streaming services that exist today include FuboTV, Hulu+ Live TV, ESPN+, Sling TV, NFL Game Pass, MLB TV, UFC Fight Pass, and Fox Sports Live.”

Plus, live-streamed sports can target ads with intelligence from large amounts of viewer data, incorporate interactive capabilities that heighten engagement (including betting), and help advertisers reach fans where there are gaps in programming availability through traditional TV.

In a survey using a representative sample of 5,000 people across the U.S., U.K., France, Germany and the Netherlands by Sapio Research, for Verizon Media, 51% of sports fans said they use streaming services to follow sports that aren’t available anywhere else.

As for advertising, PwC estimated that esports revenues totaled $805 million in 2018, with the biggest shares contributed by sponsorships ($277 million), media rights ($182 million) and streaming ads ($162 million). 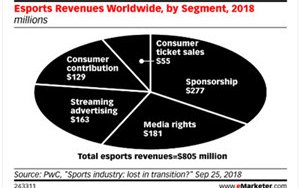 All of which is why many brands are looking to formulate or expand on strategies for tapping this powerhouse media channel.

The good news: “For many sports marketers, the transition from TV to digital video is seamless,” observed eMarketer. “They are already experimenting with advanced targeting, cross-device campaigns, social media amplification, personalization features and more. Those capabilities will increase as streaming platforms evolve, so marketers see this paradigm shift positively.”

However, the Verizon Media research on shifting sports viewing habits uncovered some important differences in users’ advertising (and other) expectations.

“It is clear that expectations of sports streaming services are different to those of traditional linear broadcasts,” sums up the report.

Notably, four out of five consumers expect streaming services to offer “different — and less interruptive — ad experiences, with avid sports fans prepared to receive more integrated commercial messaging. Streaming consumers expect the programming to be commercialized differently -– either through a subscription fee that covers the opportunity cost of advertising, or through other forms of commercial messaging woven into the fabric of the broadcast itself.” 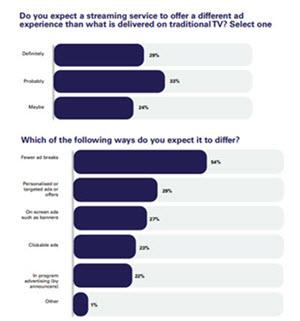 Further, a full 68% expect to have DVR — as in ad-skpping and time-shifting — capability, along with other enhancements: 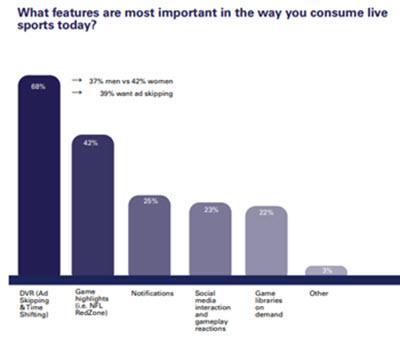 “I don’t understand as a consumer why I would put up with interruptions anymore in the middle of a [first-tier dram or comedy] show,” he said. “On the other hand, in sports, there are natural breaks and I think people will still put up with advertising.”

“We’re in the process of building the technology to dynamically stream ads. I think we would be wise not to replicate the advertising model on television, which I think has just become mind-crushing to people as they try to watch games. This is more acute in the U.S. than anywhere else. If you want to watch the College Football Championship it’s now a four-hour and 15-minute experience with something approaching 100 advertisements in it, and it is tough to sit through. We’d be better off doing more branded marketing —  more programmatic marketing or marketing that adds something to it.”

For example, he noted, an “authentic” mention of a brand in a prerecorded 30-second clip from an interview with a boxer might be run at the midpoint of a boxing match.

The world’s leading sports-rights holders are already implementing “more advanced” models in which sponsor advertisers “are integrated into the substance of the product and the brand itself,” according to Verizon.

“It’s no surprise when our third-party data comes back that it’s those sponsors that have invested and created something really cool that have done best,” Dan Rossomondo, NBA senior vice president and head of global media and business development said at a Leaders Sport Business Summit last May, the report notes.

“They’ve gotten behind the story they want to tell with us,” Rossomondo added, citing Kia, State Farm and American Express as examples.