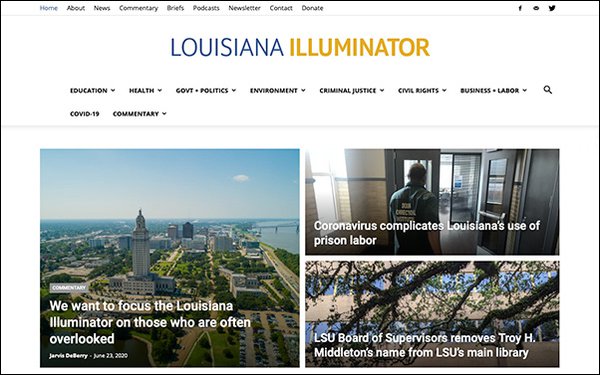 The Louisiana Illuminator launched today. It is the States Newsroom's 16th news outlet.

Jarvis DeBerry is editor in chief of the Illuminator.

DeBerry, a 22-year veteran of The Times-Picayune, was part of the team awarded a Pulitzer Prize for public service for its Hurricane Katrina coverage. He will oversee a team of reporters assigned to cover Baton Rouge, the state capital, filing news stories and conducting in-depth investigations.

He held various posts, including reporter and deputy opinions editor for TheTimes-Picayune, later serving on the editorial board of cleveland.com.

“The majority of political coverage centers on politicians, their fights with one another and their ambitions. The Illuminator promises to keep its focus on Louisianians who live with their elected officials’ decisions,” stated DeBerry.

The Louisiana Illuminator’s debut issue covered the COVID-19 spike in the state; Gov. Edwards support for less stringent gun laws; and the removal of Troy H. Middleton’s name from the LSU library. A university president from 1951-1962, Middleton backed segregationist policies.

In his opening op-ed, DeBerry writes he wants to run commentaries that "give special attention to Louisianians who are poor, marginalized, overlooked or disregarded.”

States Newsroom is a nonprofit funded by readers and philanthropists. It supports ad-free, fact-based, nonpartisan news at no cost to the public.

Chris Fitzsimon, director-publisher of States Newsroom, adds: “Our vision for state journalism is to make sure that no matter where you are or where you live, you have access to the most accurate and high-quality reporting.”