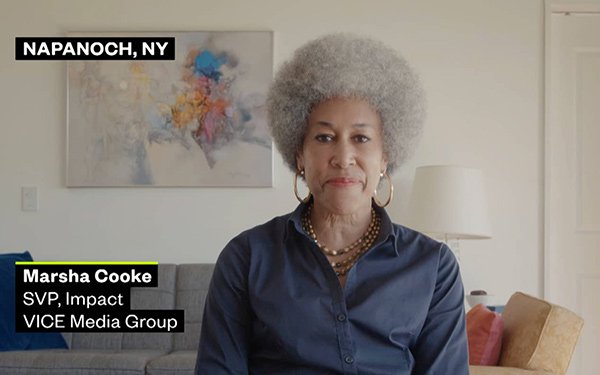 The company announced the launch of the Vice World News brand, which will produce hundreds of hours of international TV, digital and audio news programming for global audiences.

It will feature enterprise and investigative reporting, day-of coverage and analysis from journalists in the EMEA, APAC, Latin America and North America regions.

More products will launch over the coming year, according to the company.

At this year’s presentation, Marsha Cooke, senior vice president of impact, asked advertisers to look again at the effects of keyword blocking.

In an effort to avoid having ads appear next to controversial or unsafe content, marketers are missing an opportunity to be next to important journalism.

While audience's news consumption has been at an “all-time high” during this moment in history — given the protests and pandemic — advertisers are deeming the content “brand unsafe.”

COVID-19 topics were 137% more likely to appear on blocklists.

Cooke asked agencies to review the practice of keyword blocklists and instead look to more contextual-based solutions.

“Words matter. Journalism matters. How you choose to spend your ad dollars matter,” she said.

Vice also announced it is teaming up with iHeartMedia for a new podcast, called “VICE News Reports,” a weekly investigative series covering news subjects from around the world.

iHeartMedia will have a first-look option to co-produce additional podcasts based on Vice Media Group content.

“Vice News Reports” will debut this fall with half-hour episodes, with mix of long and short-form reports, feature stories and multiple episode series.

Topics will include global conflicts and civil uprisings, the rise of the alt-right in the U.S. and abroad and a multi-part investigation into the debate about arming teachers in America’s schools.

Vice Media Group is launching an editorial initiative called “The 8:46 Project” that will expand reporting on systemic racism.