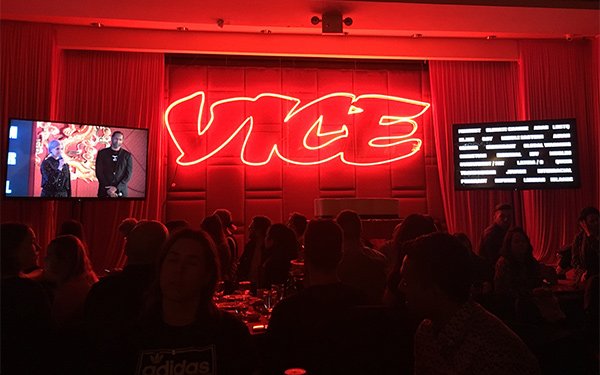 The company pitch: The global population is younger, more diverse and yearning to hear a variety of voices. Vice can be the "megaphone" for advertisers to reach this new audience. Gen Z, it noted, is the biggest generation yet, with 48% identifying as something other than heterosexual.

Vice made a number of bold announcements during the hour-long presentation.

To begin, it is redesigning its main website, Vice.com, this week, rolling its over a dozen digital brands under one umbrella.

A reversal from its former strategy, Vice says audiences and advertisers alike were confused by the sites. The change will streamline user engagement and experience, and provide advertisers with more opportunities for integration across its audience.

Dom Delport, Vice’s president of international and global chief revenue officer, said the redesign makes it “easier to discover, easier to buy.” Broadly, Amuse, Free, Tonic, Waypoint and Vice Sports will be folded into Vice.com, while Motherboard, Noisey, Munchies and Vice News will have dedicated verticals on Vice.com while retaining their individual branding.

Another new feature of the redesigned site is Vice Stories, a section dedicated to vertical video that can house content from the company's social media stories. Advertisers can integrate into the video directly, rather than going through Snapchat, Instagram and other platforms.

Vice also announced it will no longer blacklist 25 words that advertisers often classify as “not safe.” The company says it gets hundreds of emails from clients asking not to be associated with content related to those 25 words, which are:

Cavel Khan, senior vice president of partnerships in North America, said this move is an effort “to correct our industry’s brand-safety environment.

“These words… describe our talent, our audience….” and though Vice will prioritize clients’ brand-safety goals, the company wants to do so “without creating bias.” It partners with Oracle’s Grapeshot technology to review every piece of content to ensure safe monetization.

Also, Vice will no longer partner with other sites to aggregate traffic through Comscore.

On May 15, Vice will pull away from this, meaning its Comscore numbers will drop, “but we don’t care… because it doesn’t represent our audience,” he adds.

Vice’s ad agency Virtue said it added 22 new clients in North America in 2018, 40 globally, and had partnerships with brands like Google and Dove.

On the editorial side, Vice News’ Washington, D.C. bureau chief Shawna Thomas said her team is staffing up ahead of the 2020 election cycle.

Vice’s popular “Guides” are expanding to a new franchise: “The Vice Guide to Everything,” which will cover topics from cooking to climate change, fashion to finance, relationships and music.

A new long-form narrative documentary, called “The Contenders,” will examine the background of presidential candidates.

Viceland announced both new and returning shows, including “Jasper & Errol’s First Time” and “The Wrestlers.”

Nancy Dubuc, who entered the room with former CEO-founder Shane Smith at the beginning of the night, took the stage last.

She said many asked her why she decided to join Vice. It was not to provide “adult supervision,” she said, a reference to the assumption that Dubuc was tasked with changing company culture. Vice has been accused of fostering an “old boys’ club” environment, amid allegations of sexual harassment.

Dubuc said her decision came down to three reasons: Smith, passion and fun.  She touted Vice’s ability to provide “storytelling with passion and purpose.”