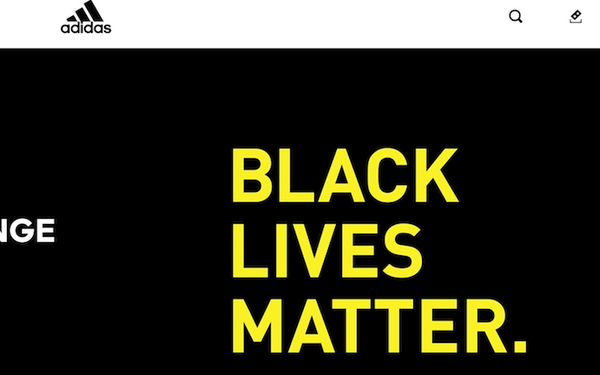 The top of the Adidas press resources page.

Karen Parkin, the head of global human resources at Adidas, resigned yesterday after facing pushback for saying that the issue of racism was “noise” that was talked about only in the U.S.

“It has become clear to me that to unify the organization it would be better for me to retire and pave the way for change,” Parkin said in a news release.

“Parkin’s resignation follows weeks of unrest at the company, stemming from years-long challenges surrounding its diversity and inclusion efforts. Those issues reached a fever pitch amid national tensions over racial equality in the United States following the death of George Floyd,” Sheena Butler-Young writes  for Footwear News.

“Early this month, a 13-member coalition representing more than 200 Adidas employees called for Parkin’s resignation. They cited comments she made last year at a company meeting in Boston at Adidas-owned brand Reebok, where she responded to a question regarding reports that Adidas was facing significant challenges in how it treated minority employees.

“Parkin, sources told FN, described concerns over racial disparities as ‘noise’ and further suggested the company did not need to take action as the criticisms were only present in its North America offices for Adidas,” Butler-Young continues.

“On June 12, Ms. Parkin said she ‘should have chosen a better word’ at the Reebok meeting, according to a message she posted on an internal Adidas communications network that was viewed by the Journal. She added, ‘it was my responsibility to make clear our definitive stance against discrimination, and this I did not. Should I have offended anyone, I apologize.’ In response, dozens of employees called on her to issue a more sincere apology with some referring to her statement as a ‘non-apology apology,’” Khadeeja Safdar, who broke the story two weeks ago, writes  for The Wall Street Journal.

“For weeks, a group of Adidas employees have held protests outside of the company’s North American headquarters in Portland, Ore. They say the company’s top executives have fostered a culture that permitted racism and discrimination, and failed to invest in Black employees or respect Black culture while exploiting those two groups to sell shoes and apparel,” Kevin Draper and Julie Creswell write  for The New York Times.

“Parkin’s departure may not be sufficient to satisfy Adidas employees who see her as part of a larger problem, however,” writes  Marc Bain for Quartz.

“‘To me, it seems as if they’re just trying to treat the symptoms and not the cause,’ said Julia Bond, an assistant designer at the company who recently sent an open letter to Adidas’s leadership criticizing the company’s inaction on racial discrimination. ‘The Karen resignation is a sacrificial lamb, so to speak,’” Bain continues

Parkin, 55, a British citizen living in Portland, was the only woman on the Herzogenaurach, Germany-based company’s board. She originally joined the company as a sales director in the U.K.

“Parkin’s career at Adidas spanned 23 years, according to Adidas AG chairman of the supervisory board Igor Landau, who said Parkin ‘always acted in the best interests of our company and our people,’” writes Chauncey Alcorn for CNN Business.

“‘Her decision to leave the company reflects that commitment and her belief that a new HR leader will best drive forward the pace of change that Adidas needs at this time,’ Landau said in a written statement.”

“This is our commitment to the Black community, and the world. We can change, and we will. This is just the start,” it claims.

“First, we need to give credit where it’s long overdue: The success of adidas would be nothing without Black athletes, Black artists, Black employees, and Black consumers. Period,” one of the two stories on the page states.

“The company has promised to ensure that at least 30% of its new employees in America will come from black or Latino backgrounds. It also set a target of those groups filling 12% of its US leadership roles within five years,” BBC Newsreports.

“Adidas is also amongst the growing number of global brands to join the advertiser boycott of social media over their handling of racist content. The move comes after the Stop Hate For Profit campaign called for companies to pause their Facebook and Instagram advertising for the month of July. Some firms have gone further and suspended their ads on other platforms,” BBC News adds.