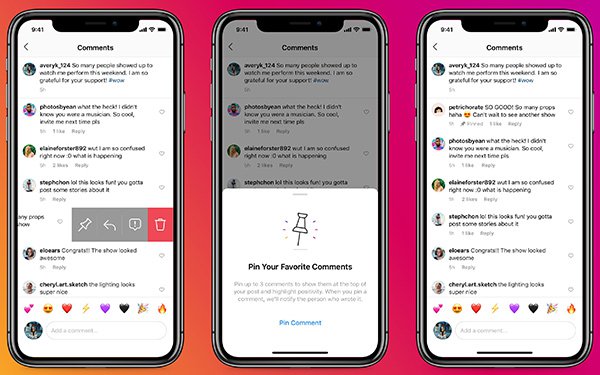 Trying to foster a friendlier social environment, Instagram is giving users more control over comments inspired by their posts.

After some limited testing, the Facebook-owned platform is inviting all users to take advantage of its “pinned comments” initiative.

“That means you can a pin a few comments to the top of your feed post and better manage the conversation,” the Facebook unit tweeted on Tuesday.

As with many updates, the news was met with a cascade of user recommendations for features and policies that Instagram has yet to adopt. In particular, many users expressed their desire for Instagram to arrange posts in chronological order and provide a clearer rationale for prioritizing some posts over others.

Instagram head Adam Mosseri recently admitted the platform needs to be clearer about how decisions are made when it comes to how users’ posts are distributed.

“Over the years, we’ve heard these concerns sometimes described across social media as ‘shadow banning’ … filtering people without transparency, and limiting their reach as a result,” he explained last month. “Soon, we’ll be releasing more information about the types of content we avoid recommending on Explore and other places.”

In response to growing accusations of racial injustice, Mosseri also committed to supporting “Black voices” on its platform, and among Instagram’s ranks.

Separately, major advertisers have expressed their concerns about the negative climate on social-media platforms, and the dangers of appearing alongside what they consider to be inappropriate content.

In response to such concerns, Facebook recently outlined additional measures designed to protect brands on its platforms.

With the help of the Media Rating Council (MRC), the tech titan committed to evaluating its partner and content monetization policies, as well as the brand safety controls it makes available to advertisers.

The timeline for the audit is undetermined, in part because the MRC and Facebook have yet to execute a formal agreement for the audit.