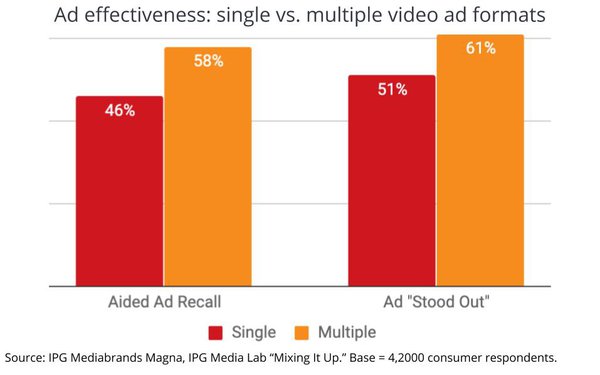 While that may not be much of a surprise, given decades of research showing mixes generally always have greater impact, the new study provides further affirmation, utilizing a combination of conventional ad effectiveness research (ad recall surveys) and eye-tracking.

“For a long time, many brands thought it made sense to put a majority of their budget into an ad format that worked for them, but our study’s findings are a major differentiator because it indicates that a mix works better at driving awareness, purchase intent and brand favorability,” Magna Senior Vice President-Intelligence Solutions Kara Manatt notes, concluding, “Creating this sort of variation in ad experiences doesn’t necessarily require creating a whole host of new assets. In our study, the same exact ad led to better results when presented differently.”