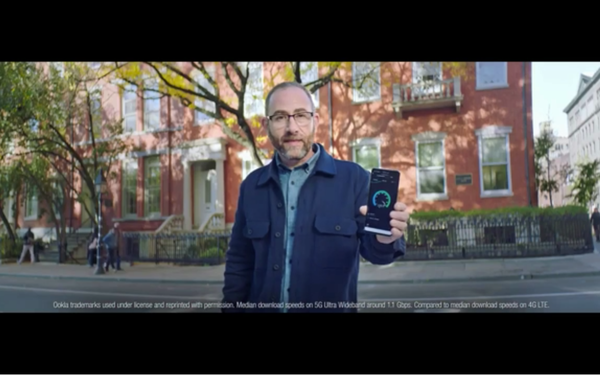 Two Verizon television ads for 5G service may mislead people about the availability of the company's ultra-fast network, according to an industry watchdog.

The group's recommendation stemmed from AT&T's challenge to two TV ads. In one of the spots, Verizon engineers in locales across the country -- including the Lincoln Memorial Reflecting Pool in Washington, D.C., Lake Michigan in Chicago and a street of houses in New York City -- boast of the company's 5G service.

The second ad also feature engineers throughout the country bragging about Verizon's 5G service. That spot includes an engineer in Omaha saying the company's service is “like an eight lane highway compared to a two lane dirt road.”

The challenged ads included disclaimers stating that 5G is only available in areas of certain cities, and that consumers need a 5G-capable device to use the network.

But the National Advertising Division said the disclosures -- which were in a small font and only appeared for a short time -- were “difficult to notice, read and understand.”

“While the commercials state that Verizon’s network is being built and is rolling out, this language, in the context of the current advertising, does not convey a clear message about the limited availability of the network in the cities where it has been launched, particularly given the unique limitations on network availability,” the watchdog wrote.

Verizon said it disagreed with the watchdog, but will comply, according to the opinion.