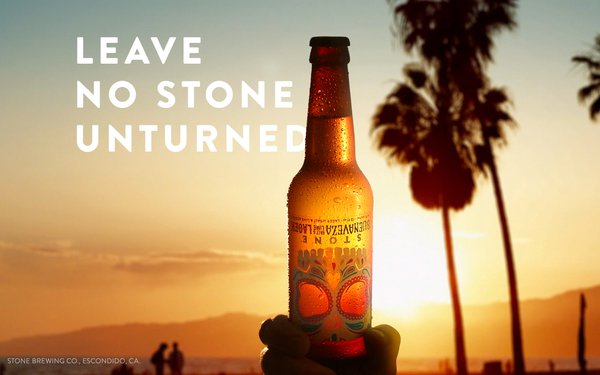 However, these plans were readjusted after the company announced its participation in the “Stop Hate for Profit” initiative to cease all paid media running on those platforms for the month of July.

OOH appears in Los Angeles and San Diego, key markets for the brand.

“We stand with those who are committed to the fight against hate speech and the spread of misinformation,” explains Dan Lamb, chief commercial officer, Stone Brewing, on the decision to shift gears. “With our first advertising campaign launching during the boycott, we decided it was vital that we support Stop Hate for Profit’s call for change no matter the impact it may or may not have on our campaign.”

The “Leave No Stone Unturned” creative flips labels upside down, leaving consumers to wonder if it were a packing mistake. Instead, Stone’s obsessive pursuit of craft beer suggests it leaves no stone unturned in the making of their extensive range of beers.