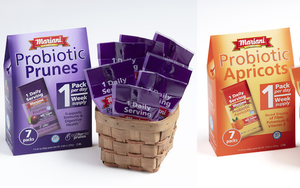 As people increasingly relate digestion to their overall well-being, more products are being introduced containing prebiotics and probiotics, targeted to just about every demographic.

Danone’s Activia brand has a new, gut-focused initiative aimed at Gen Z and millennials, while the company’s Danimals kids yogurt has introduced Super Danimals, with packaging touting “billions of probiotics” along with the claim “helps support the immune system.”

Consumers are developing “a more sophisticated understanding of digestion as a key component of health and wellness—connected to energy, weight management, inflammation and a range of other health issues,” notes research provider The Hartman Group.

The company’s Functional Food & Beverage/Supplements 2020 report found that 54% of consumers say they are consuming foods or beverages “enhanced with additional levels of nutrients/benefits already inherent in the product.” One example is yogurt containing added probiotics.

For those without a scientific degree, the difference between prebiotics and probiotics can be difficult to digest.

Prebiotics are specific food ingredients—found in things like grains, fruits and vegetables—that, when broken down in the digestive system, promote the growth of healthy bacteria.

Probiotics are considered “good” bacteria that are found in fermented foods like yogurt and sauerkraut.

According to Richard Lin, CEO of Thryve, which provides D2C gut-testing kits and personalized probiotic plans, Western diets “aren’t particularly high in probiotics, which is why it is important to seek alternative sources like supplements.”

Targeting a young audience, Danone’s Activia recruited rapper Nayim Edwards to shoot a spot titled “From A To Z Your Gut Is Where It All Begins.”

The 30-second video is a frenetic, music-accompanied parade of images showing young people doing just about everything one can imagine. What their actions have in common is “It all starts in your gut,” Edwards says.

Five years ago, dried-fruit producer Mariani Packing noted the rise of popularity in yogurt and probiotics “and decided to bring those health benefits to the dried-fruit consumer,” says senior innovation and brand manager Roberto Avila.

In 2015, Mariani launched bagged prunes, whose fiber acts as a prebiotic. Probiotics were added to the prunes in a partnership with ingredient manufacturer Ganeden Biotech.

Last month, Mariani launched single-serve packs of prebiotic/probiotic apricots and prunes because its bigger packages “were a little bulky to put in your purse or carry with you,” says Avila.

“This is basically our probiotics 2.0, if you will.”