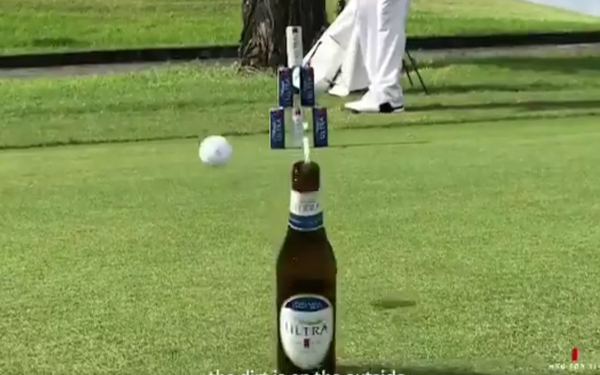 Since the end of March, Fox Sports has occasionally shown videos in which sportscaster Joe Buck does play-by-play for home videos of regular people accomplishing seemingly awesome homebound feats to relieve their cabin fever.

Now Michelob Ultra Light has branded Fox’s decidedly low-budget “Quarantine Calls” into #UltraBuckCalls, a contest of sorts, in which the only prize is Buck’s narration of the exciting accomplishment.

So basically, you win a Buck.

And he could be describing  the video of your toddler tossing a basketball through the net of a mini-hoop set in the living room, a guy artfully grilling chicken,  the competition between two dogs for a stick -- or other things so amazing only a real pro could describe them.

They don’t have to be sports-oriented, though, obviously, that’s the inspiration.

#UltraBuckCalls would seem to be aiming for the sports feats Dude Perfect has done online for years, though most likely not as, uh, perfect.  The winning videos will then be shown on social channels operated by Fox Sports, Michelob Ultra and People Are Awesome, a site that has rounded up amazing video feats for the past several years.

One of the videos Buck showed on Fox was a marble race down a kind of muddy slalom, that to his credit he makes sound exciting. Another was a video of two boys playing a one-on-one game of frontyard football. Another is a video of his wife doing somersaults down a hotel hallway.

Buck cooked up the contest himself, before the beer brand was involved.

On March 22, he tweeted, “I have good news for you.  While we’re all quarantined right now without any sports, I’d love to get some practice reps in. Send me videos of what you’re doing at home and I’ll work on my play-by-play. Seriously!”

The Anheuser-Busch brand says it has no grander plan for the homemade videos than that, and Buck is only picking four winners. Judging from some of the potential entrants on #UltraBuckCall’s Twitter feed, Marketing Daily would say this is still a wide-open competition. It closes Aug. 1.

A promotional video the brand put out for the contest shows a golfer launching a chip shot to the green that goes over a stack of Michelob Ultra cans and then hits an open bottle, which falls and begins pouring  beer into the hole.

“An  amazing feat,” Buck exclaims. “The only thing killing me is the Michelob Ultra is being wasted. What a shame.” But no. Moments later, we see that the golfer stuck a glass in the hole.