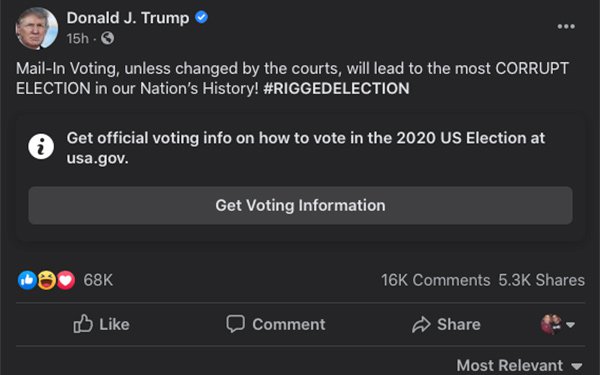 As part of a broader effort to appease critics of its content policy, Facebook has started adding labels to some misleading messages posted by President Trump.

Yet, rather than identifying the message as inaccurate, the label simply directs users to “official voting info on how to vote in the 2020 US Election at usa.gov.”

The label was added to a new post on Trump’s official Facebook page, which reads: “Mail-In Voting, unless changed by the courts, will lead to the most CORRUPT ELECTION in our Nation's History! #RIGGEDELECTION.”

Not limited to Trump, the tags have already appeared alongside several posts put out by Former Vice President and presumptive Democratic presidential nominee Joe Biden.

For Facebook, however, this is just the latest effort to rein in Trump and other messengers of political misinformation and hate. The social giant recently removed a number of ads paid for by Trump’s reelection campaign for violating its policy against organized hate.

However, these actions have clearly not been enough to appease a number of civil-rights groups behind the #StopHateForProfit ad boycott.

On Tuesday, critics were unimpressed by Facebook’s latest effort to hold Trump accountable for his lies.

“This warning seems pretty useless,” Rick Hasen, a professor of law and political science at the University of California, Irvine, tweeted on Tuesday. “It might even seem that Facebook is endorsing what Trump is saying and providing a path for more information.”

Jeff Jarvis, a professor at The City University of New York graduate school of journalism, agreed.

“This doesn’t look like a challenge,” Jarvis wrote of Facebook’s new label. “It looks like an offer to get more of the same.”