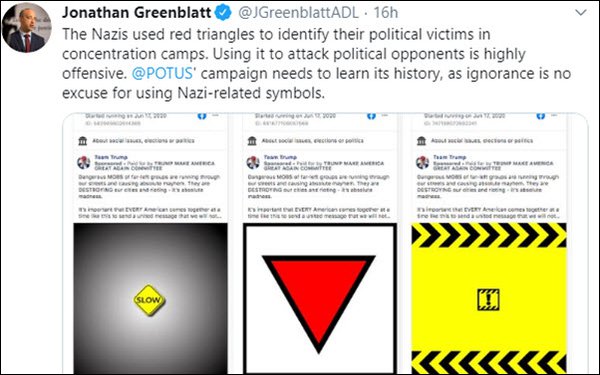 It took use of Nazi symbols by the Trump re-election campaign, but Facebook has now budged a bit from its "hands off" policy for political ads and speech. The platform has removed at least a few of the campaign's ads for violating its policy against organized hate.

That symbol was used by the Nazis to identify their political victims in concentration camps, Anti-Defamation League CEO Jonathan Greenblatt pointed out on Twitter (above), making their use in attacking political opponents in America "highly offensive... @POTUS' campaign needs to learn its history, as ignorance is no excuse for using Nazi-related symbols," he tweeted.

“Our policy prohibits using a banned hate group’s symbol to identify political prisoners without the context that condemns or discusses the symbol,” a Facebook spokesperson said on Thursday.

However, according to Facebook's political ad library and data, the paid ads, which began appearing on Trump's main Facebook page, the "Team Trump" campaign page and Vice President Pence's Facebook page on Wednesday, were seen nearly a million times in Facebook users' feeds on Trump's page alone before they were removed.

The decision comes on the heels of calls by U.S. civil rights groups, including the NAACP and the Anti-Defamation League, for advertisers to boycott Facebook during July.

Among other offenses, the groups assert that Facebook “allowed incitement to violence against protesters fighting for racial justice in America,” and “amplified white nationalists by including news sources with known extremist ties into their 'fact checking' program.”

“We’re going to review our policies allowing discussion and threats of state use of force to see if there are any amendments we should adopt,” Zuckerberg wrote in a letter to employees, who have also been protesting his refusal to apply Facebook's content policies to political content and ads, including Trump's.

In addition to declaring “When the looting starts, the shooting starts" in late May, Trump has used Facebook and other social media to threaten to intervene to break up the largely peaceful protests taking place in Seattle's so-called "Capitol Hill autonomous zone."

Zuckerberg initially responded to Trump’s "shooting" threat by reiterating Facebook’s commitment to free expression. “I believe people should be able to see this for themselves, because ultimately, accountability for those in positions of power can only happen when their speech is scrutinized out in the open,” Zuckerberg wrote at the time.

Since then, however, the civil-rights movement sparked by the murder of George Floyd has gained momentum, and in early June, hundreds of Facebook employees staged a “virtual walkout” for giving Trump a platform to incite violence and spread disinformation.

Putting more pressure on Zuckerberg, Twitter and Snap recently began imposing limits on Trump’s content. Twitter started attaching warning labels to several of Trump’s tweets, including those that promoted violence, while Snap decided to stop promoting his account on the Discover section of its flagship app.

In response, Trump recently signed an executive order that aims to negate the law that currently protects the tech companies from repercussions relating to content on their social platforms. Three FCC commissioners have now expressed their skepticism about the legality of enforcing Trump's order.

In addition, the Trump campaign has ratcheted up its attacks on industry leaders. “Radical Snapchat CEO Evan Spiegel would rather promote extreme left riot videos and encourage their users to destroy America than share the positive words of unity, justice, and law and order from our President,” Brad Parscale, Trump 2020 campaign manager, claimed in a recent statement.