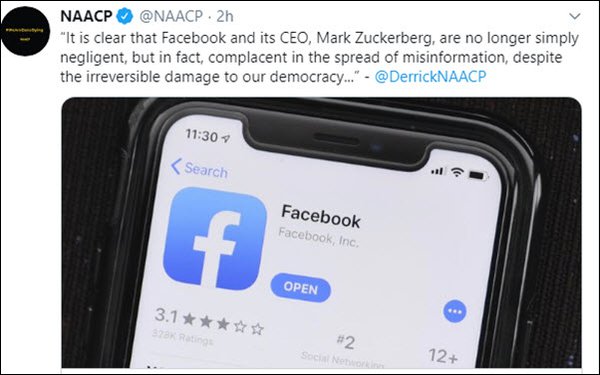 U.S. civil rights groups including the NAACP and the Anti-Defamation League have launched a campaign urging large advertisers to stop spending on Facebook for the month of July.

The campaign, which seeks to draw attention to some of Facebook’s policies, was announced in an ad in Wednesday’s Los Angeles Times, and first reported on by The Wall Street Journal.

The ad maintains that Facebook “allowed incitement to violence against protesters fighting for racial justice in America in the wake of George Floyd, Breonna Taylor, Tony McDade, Ahmaud Arbery, Rayshard Brooks, and so many others. They amplified white nationalists by including news sources with known extremist ties into their 'fact checking' program. They turned a blind eye to blatant voter suppression in their platform."

The ad also accuses Facebook of acting irresponsibly in instances such as its refusal to label Holocaust denial as hate speech.

Other groups involved in the boycott push include Sleeping Giants, Color of Change, Free Press and Common Sense Media.

The volume of criticism of Facebook’s refusal to block false political advertising and false or inflammatory political statements — such as President Trump’s recent threats against protesters — has been ramping up in recent days.

“And when [Facebook COO] Sheryl Sandberg found out that Mark Zuckerberg’s website was being used by foreign powers to interfere in the 2016 election, what did she do? She got angry at the Mark Zuckerberg employee that came to her and came to the board and warned them that American democracy was at risk,” Scarborough said, as part of a long, angry segment. “Mark Zuckerberg said he doesn’t care that people use his site to lie. He doesn’t care that they use their site.”

Last week, former Vice President and presumptive Democratic Presidential candidate Joe Biden launched an advertising and petition campaign to demand that Facebook stop the spread of misinformation and disinformation about the upcoming elections.

Zuckerberg has continued to cite the First Amendment and insist that it is not Facebook’s role to interfere with political commentary or advertising. However, yesterday he announced that Facebook will now enable users to block seeing political ads, and start a campaign to encourage voting.

The Department of Justice is now planning to propose changes to Section 230, the federal law that protects tech companies from being held liable for the content of people's posts on their platforms.