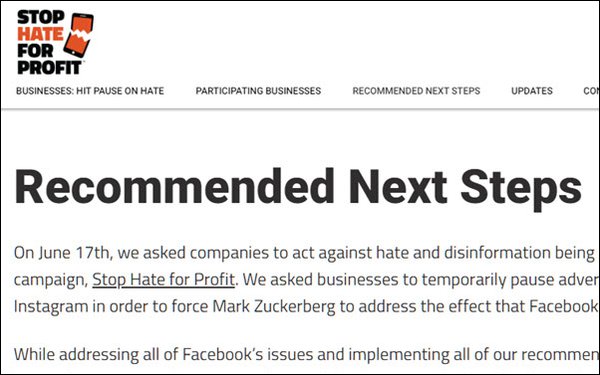 After meeting with Facebook’s top brass on Tuesday, leaders of groups behind the #StopHateForProfit advertising boycott of Facebook called on advertisers to continue withholding their ad dollars from the company.

“#StopHateForProfit didn’t hear anything today to convince us that [Facebook co-founder-CEO Mark] Zuckerberg and his colleagues are taking action,” said Jessica González, co-CEO of the media watchdog group Free Press. “Instead of committing to a timeline to root out hate and disinformation on Facebook, the company’s leaders delivered the same old talking points to try to placate us without meeting our demands," she said, adding that she was "deeply disappointed" by their responses.

“Today we saw little and heard just about nothing,” said Anti-Defamation League CEO Jonathan Greenblatt, adding that Facebook seems to be unwilling to devote “energy and urgency” to the content issues raised by the boycotters.

During the meeting, the campaign’s leaders reiterated the specific steps they want Facebook to take.

These include hiring a high-level executive with civil rights expertise to evaluate the company's products and policies with regard to discrimination, bias and hate; submitting to regular third-party audits of identity-based hate and misinformation content, with the results published on a public site; refunds for advertisers whose ads were shown next to content that was later removed for violations of terms of service; shutting down hate- and violence-focused public and private user groups; and changing its “community standards” to reflect the Change the Terms initiative founded by Free Press and other groups.

As of Tuesday, nearly 1,000 advertisers had officially committed to participate at some level in the #StopHateForProfit boycott, including some giants such as Unilever and the Coca-Cola Company.

Last week, Clegg insisted that Facebook takes a “zero tolerance approach” to hateful posts on Facebook and Instagram, despite the company's adamant stance until recent days that it would not monitor or interfere with any political speech, even if it is false or violence-inciting.

Zuckerberg originally argued that letting President Trump bypass Facebook’s standard content policies -- even when he posts statements threatening violence ("When the looting starts, the shooting starts") was best because "ultimately, accountability for those in positions of power can only happen when their speech is scrutinized out in the open.”

In recent days, Zuckerberg said Facebook would begin labeling posts from influential figures that violate its content policies, and no longer allow “newsworthiness exemptions” for posts from public figures that incite violence or suppress voting.

However, he has also stated straight out that Facebook will not give into pressure about its policies, and has no intention of implementing the specific changes urged by the boycotters.

And on Tuesday, Sandberg published a post reiterating Facebook’s stance: “We have clear policies against hate -- and we strive constantly to get better and faster at enforcing them,” she insisted.

On Wednesday, Facebook is releasing a final report on a two-year independent review/audit of its policies and practices that is already spurring more criticism of the company from press and groups that have already seen the content.