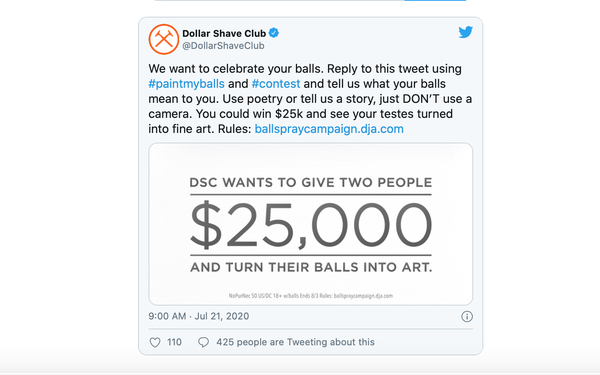 Dollar Shave Club is launching a promotion where two male consumers will each win $25,000 for the best tribute to their testes.

The D2C digital native is asking men to state in 280 words or less on Twitter from now until Aug.3 how their testicles make them resilient, confident and vulnerable. Entries, which can feature poetry, song lyrics or a story, must include the hashtags #paintmyballs and #contest for the chance to win.

The best two entries will get $25K and their genitalia will be turned into fine art by artist Serge Gay Jr.

As of Friday afternoon, already 370-plus men have tweeted their tributes, several of whom thank their testes for making it possible for them to have children. Some provide song lyrics meant to be rapped, perhaps to one of the cadences in "Hamilton."

The promotion is tied to DSC’s new Grounds Keeper Ball Spray, which is designed to keep that area feeling fresh and chafe-free all day long. It sold out in less than two weeks after it debuted, one of the fastest products to sell out in DSC history.

The no-talc, no-zinc formula absorbs moisture and reduces chafing, according to the company. It is available for $6 on dollarshaveclub.com (the brand has created a wait list.)

Dollar Shave Club is the most used subscription service by millennials according to a survey earlier this year by Roth Capital Partners.