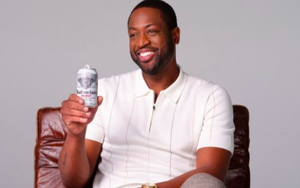 Budweiser is introducing Budweiser Zero, which, as the name implies, is a no-alcohol beer that also has no sugar and 50 calories per 12-ounce can.

It’s being hawked by former NBA superstar Dwyane Wade, who Budweiser says co-founded and helped develop Zero.  The company says he also helped design the can. His connection may help Budweiser sell Zero as a wise alternative to beer with typical alcoholic content.

“With sports making a return, this is timely as Bud Zero is a game changer by letting athletes enjoy the taste of a refreshing beer without impacting their mental and physical game,” Wade said in a release.

In the first wave, non-alcoholic beers were generally marketed to people who wouldn’t or couldn’t drink, for medical or religious reasons. Now, they’re being aimed at health-conscious drinkers.

Zero joins the others -- mainly made by craft brewers -- that have introduced the same sort of beverage over the last couple of years, as abstinence became a little bit of a thing.

Probably the best-known of the newer non-alcoholic beers is Heineken’s 0.0, which made a splash when it entered the market and became a sponsor of last year’s U.S. Open tennis tournament.

Taste-testers give high marks to Clausthaler, a beer from Frankfurt-based Radeberger Groupe, Germany’s largest brewing company. More recently, tiny craft brewer Athletic Brewing Co. from Stratford, Connecticut has been getting some buzz -- well, as much buzz as an alcohol-free beer can -- for its line of well-marketed non-alcoholic beers. Said marketing includes a monthly subscription plan.

Budweiser claims its new Zero is its first alcohol-free offering, and technically that might be true.

Anheuser-Busch, which makes Budweiser, has also made O’Doul’s since 1990, apparently without much of a loving base of customers. Fast Company referred to the non-alcoholic brand as “something of a cultural punching bag.”

A spokeswoman for Zero says its alcohol-by-volume content is 0.0%, while O’Doul’s is technically 0.4%. In the U.S,. a beer with less than 0.5% alcoholic content can legally call itself non-alcoholic. Likewise, Budweiser also produced low-alcohol Budweiser Prohibition Brew, which was marketed in Canada and apparently tested in parts of the U.S. in cans that look a lot like the ones Zero will have.

“Over the past year, we have seen hundreds of new beverage options come to market, with non-alcoholic and alcohol-free beverages quickly rising in popularity,” said Monica Rustgi, vice president of marketing for Budweiser. “Budweiser has an incredible opportunity to propel this movement into mainstream culture by offering a product that doesn’t compromise on the quality and taste people have come to know and love from Budweiser, a brand they trust.”

There’s a lot of runway to improve sales of non-alcoholic beer. Even with growth in the category, IRI research said non-alcoholic beer represented just .37 of total beer sales in stores in 2019. But that number is increasing.