Breonna Taylor Honored On Cover Of 'O, The Oprah Magazine' 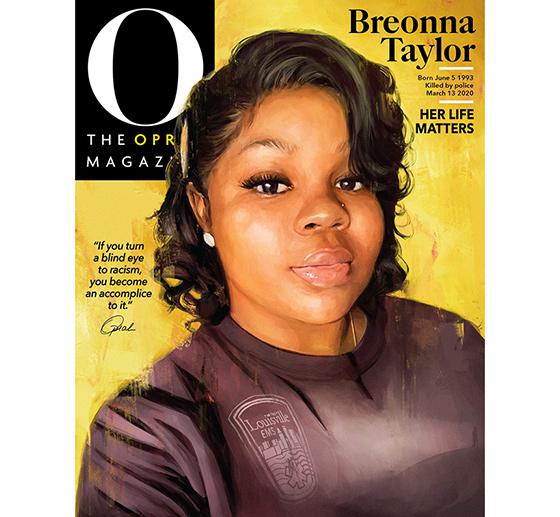 For the first time in the magazine’s 20 years of printing, O, The Oprah Magazine will not feature its namesake on the cover. Rather, the September issue’s cover honors 26-year-old Breonna Taylor, who was killed by police in her home in March.

Since the night Taylor was killed, only one of the three officers responsible has been dismissed from the force. Two others have gone unpunished, and no one has been charged with a crime.

The cover image was created by self-trained digital artist Alexis Franklin, who painted the portrait of Taylor from a selfie. The image was painted on a tablet using the programs Procreate and Photoshop.

“Looking at [the photo of Taylor], I see an innocence, simple but powerful. It was critical for me to retain that. And there was a sparkle in Breonna’s eyes — a young Black woman posing in her Louisville EMS shirt, happy to be alive,” Franklin writes in the current issue of O.

Franklin continues: “Every stroke was building a person: each eyelash, each wisp of hair, the shine on her lips, the highlight on her cheek.”

Across the bottom of the editorial pages of the issue, messaging appears asking readers to think about racism and privilege, advising them on how to show public officials they support defunding the police — and what that actually means. There is also information on social-justice organizations to support, among other topics.

Oprah dedicates her “What I Know for Sure” column to Taylor, as well, writing: “She was just like me. She was just like you. And like everyone who dies unexpectedly, she had plans. Plans for a future filled with responsibility and work and friends and laughter.”

The column concludes: “What I know for sure: We can’t be silent. We have to use whatever megaphone we have to cry for justice. And that is why Breonna Taylor is on the cover of O magazine. I cry for justice in her name.”