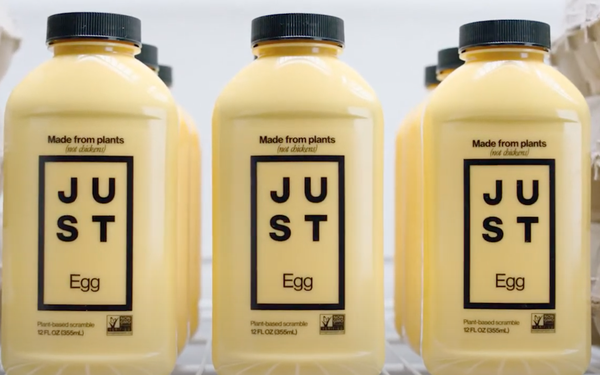 A series of ads titled “Plant-Based Hits...” explains the various ways that JUST Egg—created from the mung legume—can be used to cook omelettes, French toast, pad Thai and quiche, among other meals.

In a typical spot, containers of JUST Egg are shown in a grocery egg case before the camera cuts to the finished product—in this case, quiche.

While less mature than categories like meat substitutes and milk products, plant-based eggs are the fastest-growing plant-based category, according to JUST Egg parent Eat Just Inc.

JUST Egg launched just over a year ago.

“We rolled out with HyVee and a couple of other Midwest retailers first, and it really took off,” Eat Just head of global marketing Tom Rossmeissl tells Marketing Daily.

The target audience for “Plant-Based Hits…” is flexitarians, which comprise about one-third of U.S. households, according to Rossmeissl. “These are people who still eat some animal protein but are actively working to eat more plant-based food.”

To target “verified plant-based purchasers,” the company is working with ad-tech provider Viant.

Media agency AdParlor is helping to execute ad buys on Facebook and Instagram. “The audience is roughly the same. We’re looking for flexitarians.”

In a third component, JUST Egg is targeting digital audiences via Google.

Platforms on which the ads are running include Apple TV, Roku, Fire TV, Chromecast, Playstation and Xbox. They will be streamed on Sling TV, Pluto TV, Tubi, FuboTV, Xumo, Philo and Vudu.

A separate campaign component is titled #NewBreakfastClub. Among other things, it features digital programming about food education, recipes, live tutorials and influencer engagement.