Dystopia As A Leitmotif? It's All Part Of The Zeitgeist 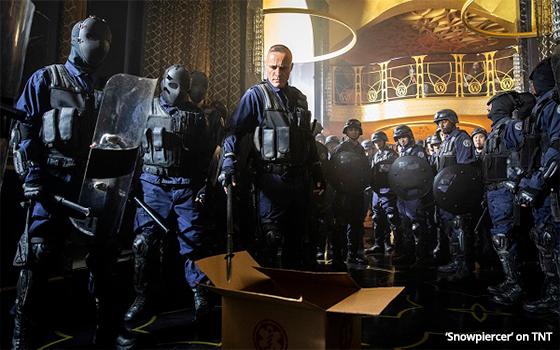 When it comes to the use of the word “dystopia,” resistance is not necessarily futile.

Personally, I have so far resisted the use of the word in any of the more that 1,500 TV Blogs I have written here since 2014. As it happens, this one is the first.

And I am more than reasonably certain I never used the word or any of its variants in any written work prior to that year because to my knowledge, I had never even heard of the word that long ago.

Or maybe I had heard the word, but dismissed it as college lecture-babble.

Or to put it another way, words such as “dystopia” or “dystopian” have long struck me as the kinds of words that are more appropriate in a university lecture hall than for use in a piece of (hopefully) popular writing composed for public consumption.

And yet, the word “dystopia” appears so often today in what you might describe as the written word of our popular culture that if you played a drinking game based on how many times you come across it in a typical day of idle reading, then you will likely become very drunk.

In my own experience, it comes up constantly in stories, reviews and even publicity materials provided by networks to describe new TV dramas which depict a chaotic, tumultuous, authoritarian future world that is -- you know -- dystopian. TNT's “Snowpiercer,” pictured above, is just one example of many.

As a TV columnist of a certain age, please excuse my use right now of the phrase “back in my day.” Well, back in my day, my fellow college students and I certainly did enjoy and appreciate our professors’ use of a number of fancy and erudite lecture words.

But we almost never adopted them for our everyday speech or in our writing (those of us who pursued writing careers).

Today, “dystopia” and “dystopian” are so overused in the popular written media that it sometimes comes across as showing off. These writers seem to be reminding the rest of us: See? I went to college!

While dystopia is the hands-down champion today of these kinds of words, runners-up are plentiful, beginning with “zeitgeist,” which has also achieved ubiquity in recent years.

This too was a word we would deride, in the manner of know-it-all sophomores, when professors would include it in their lectures.

We laughed good-naturedly at our profs' use of words like doppelgänger, leitmotif, oeuvre and genre. Now you read or hear them all the time.

In fact, just for the record, I have used the word zeitgeist twice in these TV Blogs -- and without noticeable sarcasm too (for which I apologize).

I also searched the TV Blog archive and found the word doppelgänger in two columns as well.

One of the contexts was more or less legitimate -- a blog about the use of twins in TV shows played by the same actor, from “The Patty Duke Show” to the third season of “Fargo” on FX (featuring Ewan McGregor in dual roles in 2017).

The other was in a 2015 blog that criticized someone else -- a CNN newswoman -- for using the word on TV while interviewing Hillary Clinton.

In searching my entire oeuvre here for this blog, I also found to my chagrin that I have used the word “genre” in 23 of these blogs. This was a word I once tried purposely to avoid using, but evidently, that effort was futile.

language, television
1 comment about "Dystopia As A Leitmotif? It's All Part Of The Zeitgeist".
Check to receive email when comments are posted.
Next story loading